Were You a Power Tour Long-Hauler? 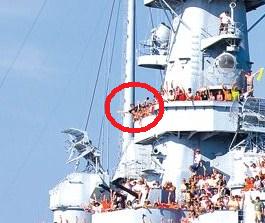 Were you on the 2010 Power Tour?  If you were, did you make the Long Haul?  The October 2010 issue of Hot Rod magazine is now on the newsstands and in it, readers will see the group picture, which was taken on the U.S.S. Alabama.  You can view the entire picture here- http://is.gd/esLMS

OptimaJim went the distance and did his best to position himself for the group photo at the end of the journey (that's him in the black shirt, with his arms stretched out, holding a camera in his left hand.

Power Tour isn't just about getting from one place to another.  It's about meeting and interacting with enthusiasts, who are passionate about their vehicles, whether it's a brand-new Camaro or an old Ford pickup truck.  We're happy to be out there, find out what folks are thinking, seeing and saying about our hobby and our batteries.

OPTIMA teams up with Kalitta Motorsports of the NHRA Read More