One angler was struck by lightning and another was ejected from his boat at 60 mph, but OPTIMA-sponsored anglers, Jack Charlie Barton weathered the literal storm to bring home the top prize at the HT Series event at Freeport, Texas. On the second day of competiton, Team Barton dealt with 30 mph winds and driving rain, with visibility reduced to about 10 feet.

Heading out to their favorite spot in Galveston Bay, the duo hit a squall and a wave washed over the bow, filling their boat with water. Given the treacherous conditions, they decided to look for a spot closer to weigh-in. They fished the rest of the day in a thunderstorm, watching their trolling motor fail, then their plotter, followed by their live well aerator. With only minutes to go, Charlie and Jack both landed fish, with Jack hauling in a six-pounder. The two OPTIMA-sponsored anglers fired up their boat and headed for weigh-in with only minutes to spare and took home the hard-earned victory and a $5,000 paycheck. Congratulations gentlemen and good luck at the Championship in Louisiana next month. Click here for more details on Charlie Jack's big victory. 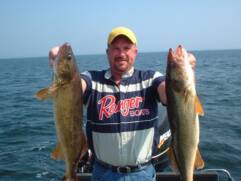