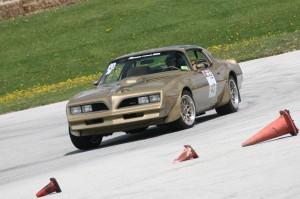 Even though summer seems like it is slipping away, we're excited about what's coming up as the year moves on. The annual SEMA show in Las Vegas is obviously a huge deal for everyone in the automotive aftermarket, but our excitement extends well beyond the days the show will be running.

Immediately following the conclusion of the SEMA show, we'll be sending some of the world's most-amazing street machines up to the racetrack at Spring Mountain, to compete for the coveted title of the "Ultimate Street Car." We've been holding qualifying events across the country, where guys like Terry Violetto have the opportunity to earn an invitation to this amazing event. Terry isn't a famous car builder or some big name in the automotive aftermarket business, he's just a hot rodder who loves to push his Trans Am to the limit.

There are a ton of videos floating around YouTube that can give you a better feel for what the OUSCI is all about, but this is one of the better ones. Check it out and if it looks like something you'd be interested in doing, we have three more qualifying events remaining- The Silver State Classic Challenge, Run Through the Hills, and the Goodguys Lone Star Nationals.

What is a Mopar muscle car? Well, it isn't just a single car, it's actually a bunch o… Read More

1973 Ford Falcon. Right-hand drive. Supercharged 351 Cleveland. This is not your aver… Read More