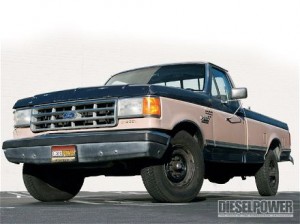 If you are a regular reader of Diesel Power magazine, you've probably been following their Project 300 F-250.  The project recieved it's name, because of the purchase price- $300.  While that may seem like a bargain on the surface, a vehicle with such a low pricetag usually needs some work.

When they originally picked this truck up, it had been sitting idle for more than two years and somehow managed to lose most of it's engine oil and brake fluid.  A laundry list of items was soon accumulated and work began to get the truck back into shape.  Anytime you get involved in a project of this nature, you're likely to spend lots of time cranking the engine, working with the doors open and the keys in the ignition and other such activities that tend to be hard on batteries.

If the guys at DP didn't know what they were getting into when this project began, they've figured it out now.  Two OPTIMA RedTop batteries now keep Project 300 ready to fire.  You can follow the progress of Project 300 online, as DP's Jason Thompson posts updates on their blog.