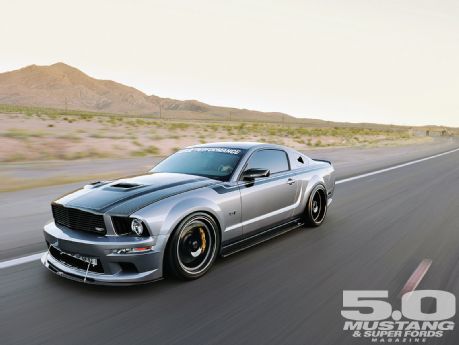 Pick up the August 2011 issue of 5.0 Mustang Super Fords magazine and you'll see the feature story on Manny Galvan's 692-horsepower Mustang GT.  Manny amazing Mustang is decked out from front to back with all kinds of carbon-fiber parts on the outside and a sofa's worth of suede on the inside.  Galvan is a Ford salesman by trade, specializing in high-performance Blue Ovals.  As a result, he knows these cars very well and knew exactly how to make his stand out from the crowd.

It looks great, goes fast and thanks to a huge stereo system, it sounds loud!  We realize the choice of battery is not always the sexiest thing to talk about when drooling over a Kenne Bell supercharger or the latest Alpine car audio system, but we always take note of wise choices.  With the powerful sounds sytem Manny installed in his Mustang, an OPTIMA YellowTop battery makes for a great choice.

The YellowTop offers plenty of cranking amps to start Manny's high-revving 4.6 motor, while also offering plenty of reserve capacity to power his tunes with the engine off.  Well done, Manny!