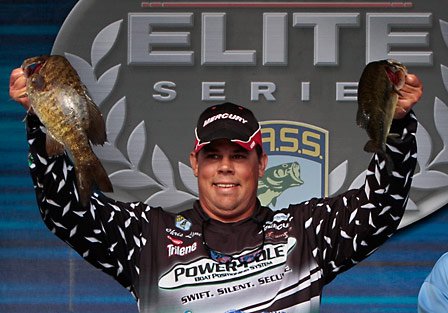 Chris Lane has been a professional angler since 2000, but he's been on an absolute tear in the past few years.  Last year, he had three top-12 finishes in the  BASSMaster Elite Series and finished  12th overall for the season, earning a trip to the BassMaster  Classic in Shreveport, Louisiana later this year. He also ranked 6th in the BASSMaster Southern Open.

Last weekend, Chris continued his hot streak, winning the kick-off event of the 2012 Bass Pro Shops Southern Open series, the Southern Open.  That victory positions Lane for a provisional berth in the 2013 Bassmaster Classic on Oklahoma’s Grand Lake o’ the Cherokees, February 22-24, 2013. If he fishes the remaining two events in the Southern Open season, he’ll cement his spot once again in bass fishing’s greatest championship.

We wish Chris and all our sponsored anglers continued success on the water this year.  If you'd like to read more about Lane's win, click on this link.

We can't offer you Clapton's Stratocaster, but how about Edwin Evers' Baitc…

We can't offer you Clapton's Stratocaster, but how about Edwin Evers' Baitcaster? Read More