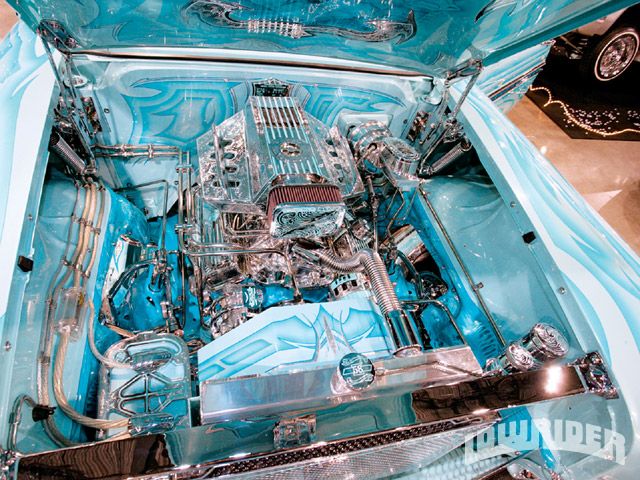 Have you ever seen puddles of liquid on or around your car battery?  What about those "snow cones" that seem to appear out of thin air around your battery terminals?  If you've seen either one, you probably saw it on a flooded lead-acid battery. That liquid around the battery was probably acid and by the time most folks see it, the damage to a vehicle's engine compartment has already begun.

The engine compartment on this 1958 Chevrolet Impala has obviously been detailed to the very extremes of what anyone might encounter in the automotive aftermarket and with so much time and effort invested in this immaculate compartment, the owner, Chris Roark, couldn't afford to take chances with his battery.  That's why he selected an OPTIMA® battery (which he custom-painted to match the rest of the engine bay).  The sealed design of OPTIMA batteries greatly minimizes the chance of acid damaging the engine compartment, which for Chris, could result in major expense to repair.

This isn't just a concern for decked-out lowriders.  Did you know C5 Corvettes have very sensitive electronics located directly below the battery tray? Guess what happens if a conventional battery leaks in one of those cars?  It's not pretty- or cheap!  Don't take chances with your pride and joy, choose OPTIMA!

If you'd like to see more of Chris Roark's '58 Impala, check out the story at Lowrider Magazine's website.

How Many Volts is a Honda Civic Battery?

We once heard about an insurance company offering bad advice about car batteries. We … Read More