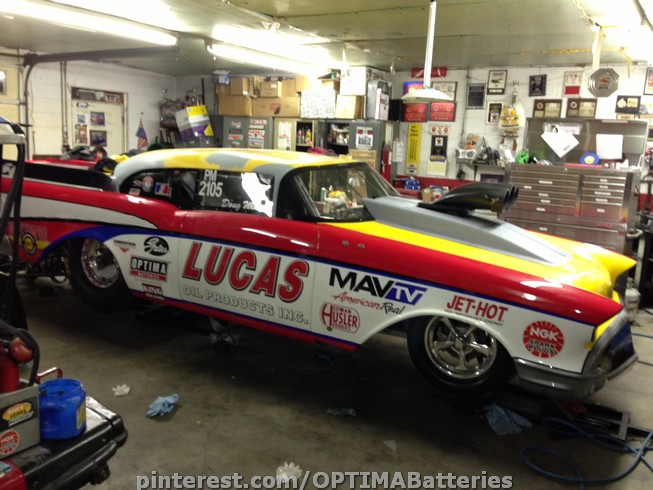 Just because the snow is flying in some parts of the country, doesn't mean drag racers aren't hard at work.  The crew of the OPTIMA-sponsored Winters Racing '57 Chevy have made some serious upgrades to their ride.  Those of you familiar with this Pro Mod monster will recognize some of them right away.

For those of you who aren't quite as familiar, allow us to walk you through some of them.  The goal was to be more competitive in NHRA Pro Mod racing and to that end, the team went to work making aero improvements as well as some engine changes. The roofline of the '57 Chevrolet was lowered three inches in the front and six inches in the rear. The windshield was also laid back from a 60-degree angle to just over 40-degrees.

A five-inch cowl hood scoop was also added to help shield the blower from the wind and further reduce drag. Under the hood, larger JetHot-coated domed pistons will increase the compression ratio and a new DMPE blower specifically made for NHRA Pro Mod rules was also acquired. The Winters crew also picked up a new 30-foot stacker trailer with a new awning thanks to the folks at Lucas OIl.

Testing will begin on the track later this month and look for them at the track in competition trim starting March 9th. Good luck to everyone at Winters Racing for the 2013 season!

One Lap of America Results 2006