Are You Faster Than a Yankee? 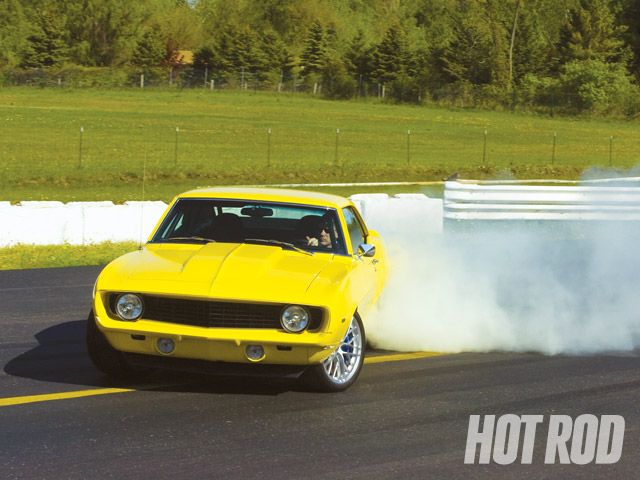 By now, many of you have caught the new TV show, RU Faster Than a Redneck, which appears on SPEED on Monday nights at 9PM Eastern. For those of you who may have missed it, the premise is fairly simple- good 'ol boys in American musclecars take on drivers of European and Import vehicles on a road course, to find out if they are faster than a "redneck." If you watched this show or the question has been burning in your head, we have some options for you.

Mark Stielow is a GM engineer, who lives in Michigan, so he doesn't qualify as a Redneck, but he could definitely be considered a "Yankee." Mark also builds some of the baddest Camaros on the planet, including the yellow 1969 Camaro (aka Jackass) pictured above. Mark will be bringing this Camaro to the 2013 OPTIMA Faceoff at Road America on the weekend of June 21st, an event that many of the drivers in RU Faster Than a Redneck have competed in previously. We will be filming this event for a TV special that will air later in the year and thus, providing you with the opportunity to find out if you are faster than a Yankee!

What's so special about the Jackass Camaro? It was the first recipient of GM Performance Parts' LS9 crate engine, the same supercharged engine the General was dropping in new ZR1 Corvettes. That puts the output somewhere north of 700 horsepower. It was also built by Mark Stielow, who as we previously-mentioned, has built arguably the most-impressive first generation Camaros on the planet.

The engine in this Camaro isn't the only component it shares with new Corvettes. In fact, you can get a good rundown on the car here. However, keep in mind, the two Camaros Mark has built since this car, the Red Devil and Mayhem, were both equipped with anti-lock brakes and some other upgrades. It's been a few years since Jackass was completed, so don't be surprised if some of the information in that article is now outdated and a few upgrades have been made.

Is it all about the car? If it were, we'd offer you the opportunity to find out if you were faster than a Yankee car. The fact is, Stielow is the first two-time winner of the OPTIMA Ultimate Street Car Invitational and he has outperformed more than a few rednecks on his way to those titles, so being able to say you've run faster against Stielow is quite an accomplishment.

Those of you who have been following #RUFaster Than a Redneck? on SPEED may have noticed that the competitors race in a wheel to wheel format. That is one significant difference between that show and the OPTIMA Faceoff at Road America- our event is timed, but it is not wheel to wheel competition. That means if your car gets dinged up, you have no one to blame but yourself, because we'll be giving you plenty of room to operate.

After reading this, we realize some of you may already be tossing in the towel, believing there's no way your car could keep up with a 700-horsepower Camaro on a track like Road America. However, the OPTIMA Faceoff at Road America is about more than just running fast times on a road course. Our competitors will also run an autocross event on the Blain's Farm Fleet go-kart track at Road America, a much shorter, tighter and low-speed course, than the big track.

Additionally, our competitors will also be running an event we like to call the Speed/Stop Squared. In this event, competitors accelerate for a short distance (usually less than 1/8th-mile, before executing a hard, hairpin turn. They then accelerate again through a short slalom course, before attempting to stop in a box approximately 40-feet in length.

That makes the autocross and Speed/Stop Squared events more about handling and braking than all-out horsepower. Maybe you are faster than a Yankee after all? One final piece of advice we would offer would be to practice before arriving at the 2013 Faceoff at Road America, as this three-event format (plus a cruise) can be challenging for newcomers. We can't think of a better warm-up event, than the Detroit Speed Southern Slam, which takes place next month at Carolina Motorsports Park.

If that venue sounds familiar, you've probably been watching Are You Faster Than a Redneck, because that is the same track used for the TV show. In fact, the Southern Slam is organized by two of the Rednecks and several of them will be running in the event (again, not wheel to wheel) so you'll have a chance to find out if you are faster than a redneck.

If that isn't motivation enough to sign up for these events, then we'll offer one final incentive. Both of these events are qualifiers for the 2013 OPTIMA Ultimate Street Car Invitational, considered by many to be the grandaddy of all street car events. All OUSCI invitees will have their vehicles displayed at SEMA all week, before heading up to Spring Mountain Motor Ranch, to compete for the title of the Ultimate Street Car, which will also be filmed for it's own TV special.

Whether you are curious to know if you're faster than a redneck or a yankee, be sure to sign up for one or both of these events today. You're guaranteed to have a great time!

Ride Shotgun with Loren Healy at King of Hammers

Do you remember the Bristol Bash at Bristol Motor Speedway? It was like LSFest before… Read More