Grubnic looks for the consistency to continue in Charlotte Four-Wide 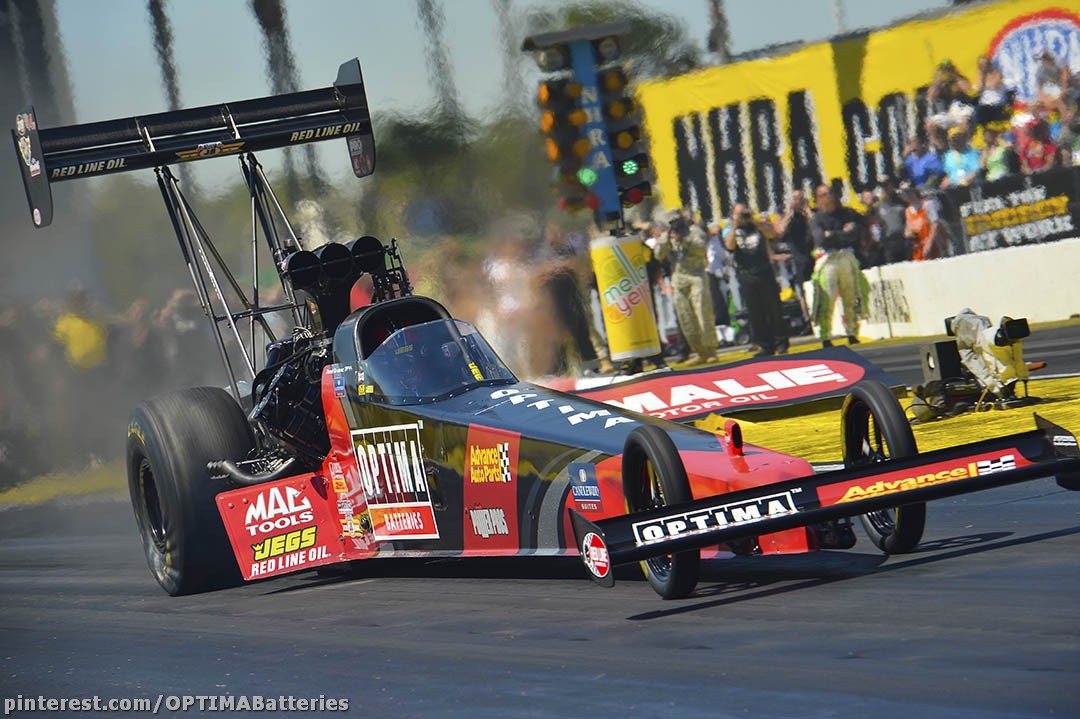 Native Australian David Grubnic, will be back behind the wheel of the OPTIMA® Batteries/Advance Auto Parts Top Fuel dragster for Kalitta Motorsports this weekend in the 2013 Mello Yello Drag Racing Series. This week the Connie Kalitta-led team will head to the fan-favorite Dollar General 4-Wide Nationals at zMax Raceway in Charlotte.

Grubnic is coming off another round one victory in the previous event at The Strip at Las Vegas Motor Speedway. He motored by a tire-smoking Shawn Langdon to pick up another round win to start his season. Grubnic’s OPTIMA Batteries/Advance Auto Parts team is 3-1 in the opening round this season, and is excited for this weekend’s  unique four-wide format. Last year, in this event, Grubnic was once again able to get past the first round, but unable to attend his first four-wide final appearance. This year the OPTIMA Batteries/Advance Auto Parts team looks to change their luck.

"We’re always very excited to participate in the annual 4-Wide Nationals,” said Grubnic. "It adds that extra flare to our sports and enhances the whole visual experience for our fans. We’re also very excited to be coming into the hometown race of our new marketing partner Advance Auto Parts. We’re looking forward to meeting everyone and improving on our performance from last year and propelling our OPTIMA Batteries /Advance Auto Parts team to the winner circle!"

This season has gotten off to a good start for Grubnic. With three round wins in the first four events, Grubnic’s OPTIMA Batteries/Advance Auto Parts team is solidly in the top ten in the championship points standings in ninth. “Grubby” also hold over a round advantage over the 11th-place team of Steve Torrence. This race begins a three week stretch of consecutive races for the NHRA Mello Yello Drag Racing Series.  Grubnic will air the Candlewood Suites colors once again in the next two events in Houston and Atlanta.

Grubnic will also be conducting a special pre-race interview on "In The Pits", an ESPN Radio affiliate in Washington D.C. Fans can interact with Grubnic throughout the interview with the chat feature on the website, www.inthepitsmedia.com. Non-local fans can also hear the interview that will air at 6:00 p.m. EST.

Grubnic is an 18-year Top Fuel veteran and earned his first career Top Fuel victory in Topeka in 2005, becoming the first racer born outside North America to win an NHRA Top Fuel event. Grubnic, known affectionately by his peers and fans as “Grubby,” is coming off another great NHRA season in 2012. He picked up his third career victory at Topeka early last season and combined the win with semi-final finishes at Norwalk, Seattle and St. Louis to give him another Countdown to the Championship placement and another season in the top ten in the final championship points standings.

The Dollar General 4-Wide Nationals begin Friday for two qualifying sessions at 3:15 p.m. and 5:30 p.m. (ET). Team Kalitta will then have two more qualifying chances on Saturday at 1:00 p.m. and 3:00 p.m. The top 16 qualified cars in each nitro class will race Sunday in final eliminations beginning at 12:00 p.m.