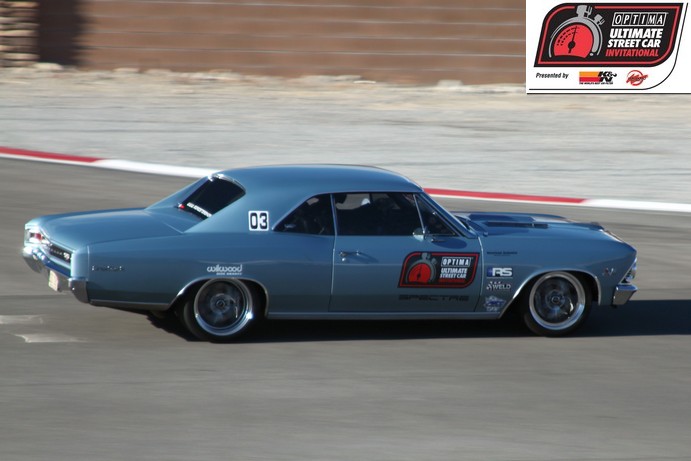 While not as universally iconic as Camaros or Mustangs, Chevelles would easily be considered amongst the most-coveted musclecars ever produced. As a result, building one that stands out from the crowd can be a challenge. Chris Jacobs has found a way with his 1966 Chevelle.

If this car looks familiar, it might be due it's participation in the 2011 OPTIMA® Ultimate Street Car Invitational or it could be from the magazine coverage it's received over the years, including two recent cover appearances. Even the underside of this car is famous, as it is prominently featured in an ad for the Roadster Shop (more on that later). All that press and accolades don't simply get handed to folks for showing up at an event or even the many events Chris has attended since his car was completed.

Make no mistake about this Chevelle, it has earned all the attention it has garnered. "The look" of this Chevelle is popular right now- obviously lowered and aggressively-raked, with 18-inch Weld wheels rolling on Michelin rubber. However, acheiving "the look" is as far as most folks go with their cars, happy to flaunt their cool ride at polish and shine contests all over the country. Dig deeper on those cars and you'll find their skeletons- drum brakes, cut springs, antiquated suspensions and tired V8s that can barely get out of their own way, even if a pair of glasspacks makes them sound cool.

Jacobs' Chevelle has all the features those other car owners fool you into believing are on their cars, just because they've achieved "the look" part of the equation. Pull off the wheels on Jacobs' Chevelle and you'll find 13-inch rotors and Wilwood brakes on all four corners. Pop the hood and you'll see a fire-breathing 427 cubic-inch LS7 that throws down over 500 horsepower to the wheels. Go to open the door and you'll find keyless entry, comfortable leather seats, ice-cold air-conditioning, a booming system, even cupholders!

Did Chris cover all the bases with his Chevelle? Put the car on the hoist and you'll discover the icing on the cake- a state-of-the-art Roadster Shop chassis, complete with an independent rear suspension. That's right, Jacobs' Chevelle can take you down the highway with a smooth ride, AC blowing, stereo thumping and still knock down 24 mph at 80 mph, thanks to a Tranzilla six-speed tranny.

Cars are built every year with that potential, but few put it use. We've seen Chris and his wife, Lynda, everywhere in their Chevelle, from Power Tour to Pahrump and everywhere in between. The car gets driven to all the right places and run hard at every available opportunity. That's why they're coming back to the 2013 Faceoff. They've climbed the OUSCI mountain and had a great time doiing it. We think you will too, so why not start your journey this year? Sign up for the 2013 OPTIMA Faceoff, presented by Royal Purple and KN Filters today!

Ryan Krayer's Ford Mustang is ready to hit the track after a 25-year journey. Read More