The call was not one that was entirely unfamiliar to us. When you sell the volume of batteries OPTIMA® does, you end up hearing just about every story there is from folks who have problems with their batteries, alternators, stereos, wiring, etc... This particular story only involved the battery and that it would no longer take a charge or hold voltage.

The battery was relatively-new and placed in a very high-end, custom-built musclecar and the owner was not happy with the unreliablility issues he was having it. Because his battery was only a little over two years old and the description of his car wasn't one that had tremendously high electrical demands, we wanted to take a closer look at it, so we offered to swap out his battery for another.

When his battery arrived, we immediately checked voltage and it measured 11.24 volts. We put it on an OPTIMA Digital 1200 Charger Maintainer and attempted to bring it back up to full voltage, which is about 12.6-12.8 volts.  The battery just wouldn't hold voltage, just as the owner described. We were stumped and short of removing the lid and doing a full autopsy, we would probably never know what happened to his battery.

However, as we loaded it into the truck to take it to the recycling center, we noticed something unusual about the battery.  One of the outer cells had a white line around the outside edge of the base of the cell and was slightly mishapen- 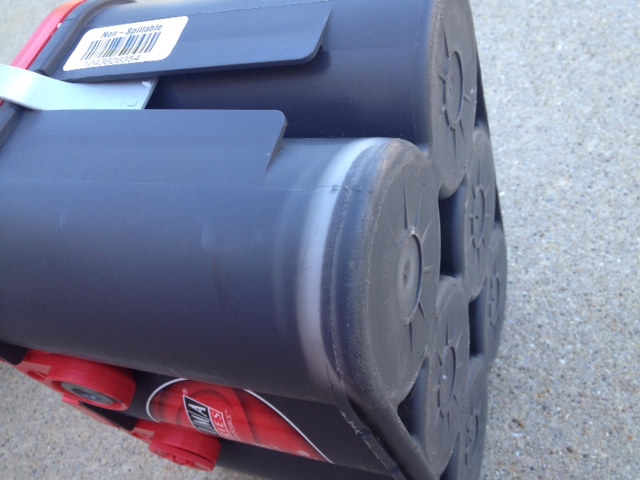 The white line had all the telltale signs of a dropped battery- the line was located on an outer cell, it only extended around the outside edge of that cell and no other cells had any such markings. That's when we took a step back and decided to examine the battery more closely. When we went back to the top of the battery, we noticed similar damage on the top of the same cylinder- 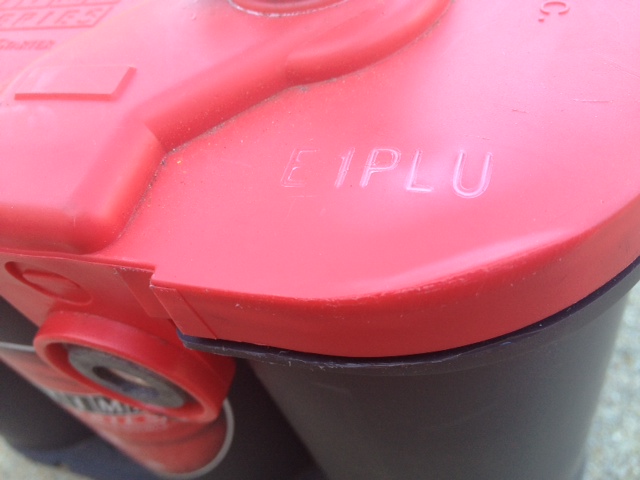 The damage here was not as obvious as the bottom of the cell, but still evident- the outer corner on the REDTOP® had a slight indentation, which produced more stress whitening on the top, highlighting the last four digits of the burn code, which are normally not so visible.

The white lines on the bottom of the cell only tend to show up on the outer cells, because a battery would probably have to be dropped on an angled surface in order for one of the center cells to be the initial point of contact. When batteries are dropped, the stress lines (and sometimes cracks) appear on the side where the impact occurred. They don't radiate around the circumference of the cell and they never show up only on the relatively-protected inside part of the cell, because dropped batteries just don't hit that part of the cell.

While it is still possible there was also an internal defect in this battery (someone could get poisoned and shot), it is unlikely that the failure was caused by anything other than the battery being dropped.  Who dropped the battery remains a mystery. If someone knowingly did it, they certainly haven't stepped forward and that person might not have been the owner of the car or even the person who maintains it for him. The battery could've been damaged before it was even purchased or if it was purchased at an online retailer, it could've been damaged in shipping.

Did you know not everyone who sells OPTIMA batteries online is an authorized retailer?  Authorized retailers will honor our factory warranty and provide warranty service for the batteries they sell. They will also ship batteries in approved packaging. This is where some retailers try to take shortcuts. The end result are batteries that end up getting damaged during shipping and fail prematurely, sometimes immediately.

If this battery was damaged during shipping, it could've continued to function for some period of time after delivery, but the damage from the impact would eventually shorten the lifespan of the battery.  That is why we strongly encourage our customers to only consider authorized retailers when shopping online and carefully inspect their battery when they receive it, whether they are buying it at a store or an online retailer (even buying directly from us).

Is there any obvious damage to the case of the battery, like the stress marks we saw on this battery or cracks? Are the terminals cracked, bent or mishapen in any way? If any of those obvious signs of damage are present, immediately contact your retailer and arrange for a warranty exchange. Batteries are heavy and sometimes awkward items to handle and sometimes accidents do happen.  Make sure the battery you purchase is ready to perform and once you put it into service, keep it fully-charged whenever possible and never let it sit at a voltage level lower than 12.4 volts.

Vintage sportscar racing at Road America is an institution. See a massive gallery of … Read More

OPTIMA is the Official Battery of M1 Concourse