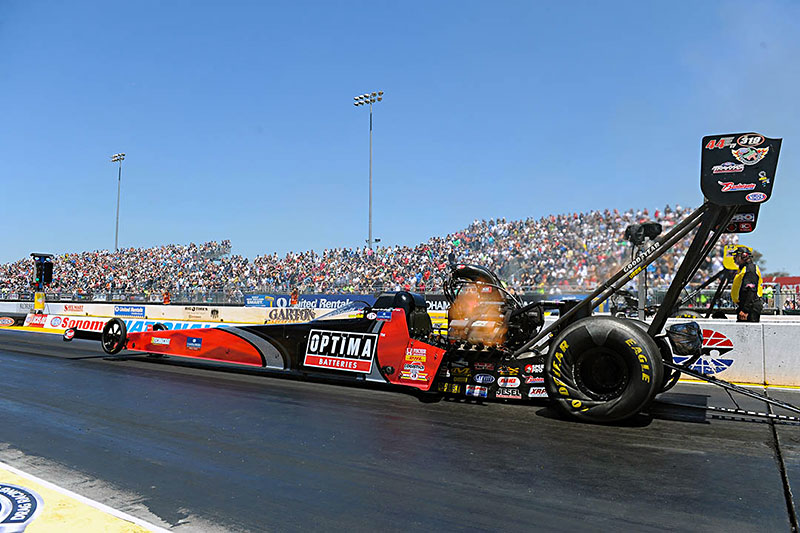 Native Australian David Grubnic, driver of the OPTIMA® Batteries Top Fuel dragster for Kalitta Motorsports, raced to a runner-up finish in Sunday’s eliminations of the annual running of the NHRA Northwest Nationals at Pacific Raceways in Seattle.

In the semifinals, Grubnic faced first-time semifinalist T.J. Zizzo. Once the “Christmas Tree” went green, Grubnic was out of the gate first and never trailed as Zizzo had traction problems, 3.847 sec., 310.55 mph to 4.611 sec., 167.74 mph. Grubnic’s win over Zizzo sent him to the 17th final round of his career and first “money round” of the season.

“Our OPTIMA Batteries car was one of the best cars on the property in Seattle and we’re extremely happy about that even though we didn’t get the win,” Grubnic, a 50-year old resident of Bozeman, Montan, said. “Sure we’re disappointed we didn’t go home with the trophy, but Connie (Kalitta, team owner and crew chief) and the entire OPTIMA Batteries team did an awesome job all weekend so we’re not hanging our heads. We made up some valuable points and that’s great.”

Top Fuel drivers now have only two events remaining to qualify for NHRA’s six-event “playoff”, the Countdown to the Championship, by being in the top ten in Mello Yello championship points when racing concludes at the famed U.S. Nationals in Indianapolis, Aug. 28-Sept. 2. Grubnic is currently in 11th place, 78 points away from the top ten. He entered the event in Seattle 126 points behind 10th place.

Grubnic is an 18-year Top Fuel veteran and earned his first career Top Fuel victory in Topeka, Kansas in 2005, becoming the first racer born outside North America to win an NHRA Top Fuel event. He has garnered three NHRA Top Fuel national event victories so far. The always-affable Grubnic is known affectionately by his peers and fans as “Grubby”.

If you have salt fever, check out this massive album of images from Bonneville Speedw… Read More

Where is the Pikes Peak Race?

Where does the legendary Pike's Peak Hill Climb take place? We'll tell you in the Pow… Read More