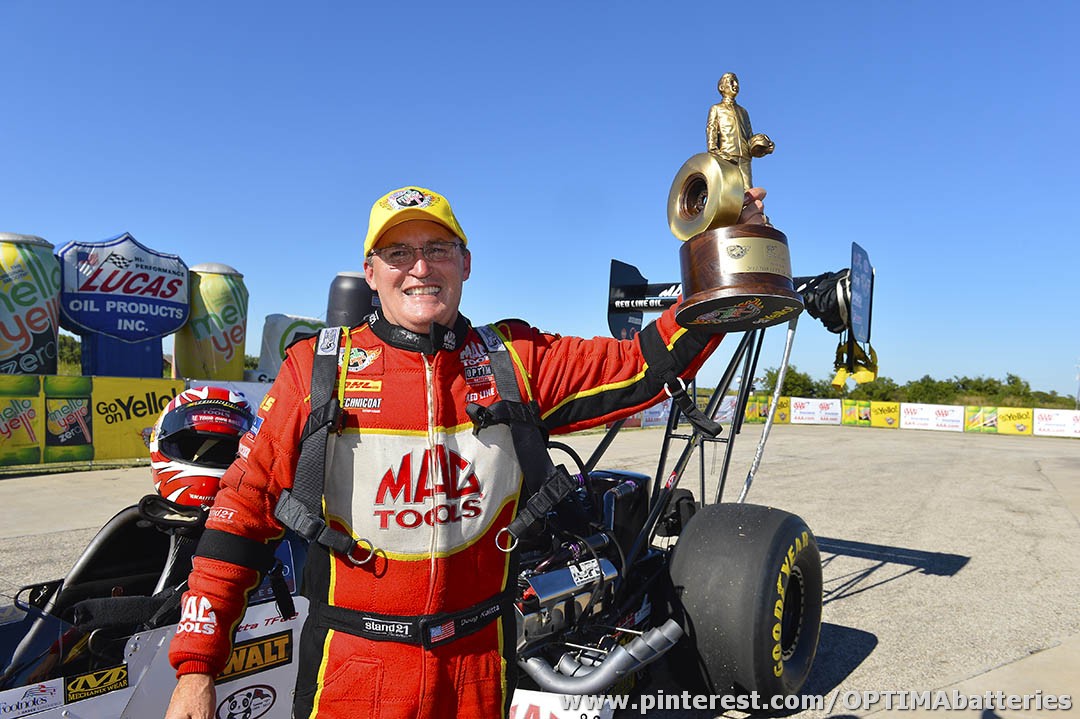 The wait is over. Doug Kalitta, driver of the OPTIMA-sponsored “Big Red” Mac Tools Top Fuel dragster, is once again in the winner’s circle at an NHRA Mello Yello Drag Racing Series event. Kalitta and his team lead by crew chief Jim Oberhofer were victorious Sunday in eliminations at the annual running of the AAA Texas NHRA FallNationals in Ennis, Texas, just a few miles south of downtown Dallas.

The win marks the first of the season for the 16-year Top Fuel veteran and the 33rd of his illustrious career driving in the world’s quickest and fastest auto racing class. It also ends the longest winless streak of his career at 71 events (Denver, 2010). The victory in Dallas moves Kalitta into a tie for the Mello Yello Top Fuel championship points lead with only four events remaining in the 2013 NHRA Mello Yello Drag Racing Series. Kalitta, who entered the Dallas event in fourth place in points, has not been in or shared the points lead for the class since the season-opening event, the famed Winternationals, in 2009. He is a two-time Top Fuel championship runner-up.

En route to his long overdue win in the Lone Star State, Kalitta, the No. 2 qualifier (3.825 seconds, 318.39 mph), dominated Sunday’s eliminations by posting the quickest run in three of the event’s four rounds of racing (second quickest of the opening round).  He defeated Larry Dixon, Brittany Force, and pre-event points leader Spencer Massey on his way to the 67th final round of his career and his first “money round” since Norwalk (Ohio) in July.

“Whew, man, am I glad to get back in the winner’s circle. It’s been way too long,” Kalitta, a 49-year old resident of Ann Arbor, Mich. said. “I can’t say enough about my Mac Tools team. Those guys are the best in the business and deserve all the credit. We’ve had such a great hot rod all year long so I’m glad to see we finally sealed the deal for all my guys. We had everything go right for us today. It was a really good day for the whole team. We’ll be celebrating this win for a while.

“It was also great to get a win for Jim and (daughter) Ashley Oberhofer. We lost Jim’s wife Tammy not too long ago to cancer. The Oberhofers have been part of our Kalitta Motorsports family for almost 30 years and losing Tammy was a huge blow to all of us. Tammy was also our office manager for many years and a truly wonderful lady. She is dearly missed by everyone, but I’m very glad we were able to get this trophy for Tammy.”