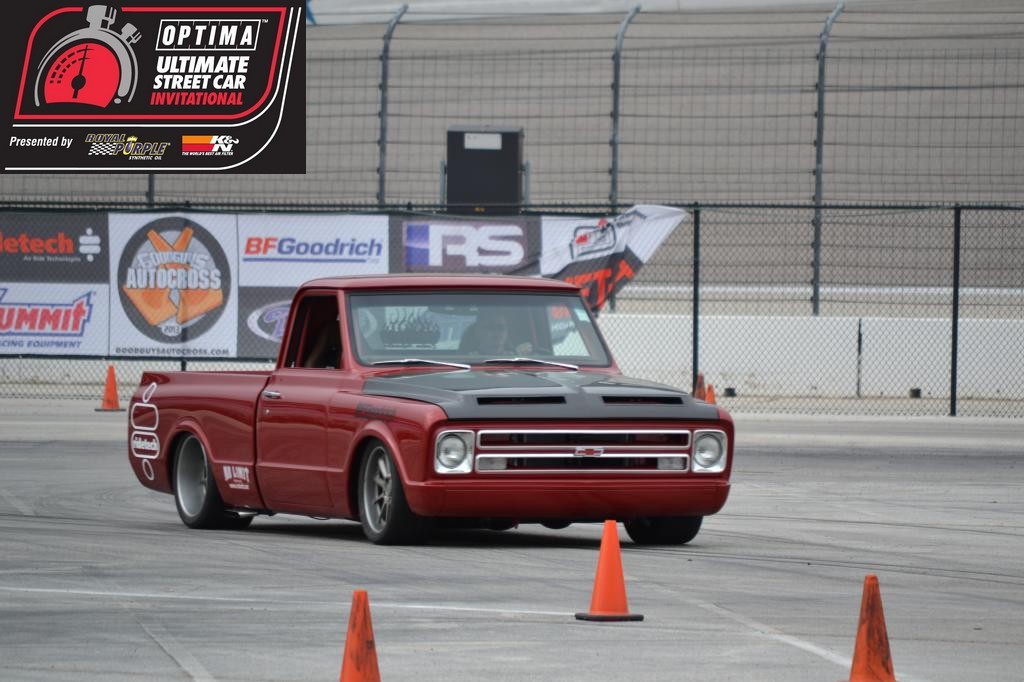 Chris Smith has had a busy year since we last saw him at the 2012 OPTIMA Ultimate Street Car Invitational, presented by Royal Purple and KN Filters. His gorgeous 1967 Chevrolet C-10 pickup has been put on a major diet during that time, losing more than 300 pounds from last year's 4,200-pound race weight. What prompted that change? The competition demanded it.

Smith won the Goodguys East Coast Nationals, but when he arrived in Columbus, he ran near the bottom of the pro class. When you have over 700 horsepower at your disposal, there is probably an expectation that you should do better, even against top competitors, even in a truck. Grip and weight were the areas of focus and to that end, Chris went to work on the front clip, adding a No Limit Engineering Wide Ride IFS. He also added a Carbon Kustoms carbon fiber hood (pictured) to take some weight off the front end. No Limit's new front clip also allowed him to run significantly larger BFGoodrich Rival tires, with 315 rubber series up front and 335s in the rear. You can see the build thread on this upgrade at 67-72trucks.com.

Being a seasoned competitor, Chris knew he couldn't just make changes without field-testing them, so with the new combination he headed off for the Goodguys event in Indianapolis. The new front clip and hood seemed to make a difference and the Ridetech triple-adjustable Shockwaves worked flawlessly on the autocross, where they moved up to the middle of the pack. That finish was repeated again in Texas elevating Smith to tenth place in Goodguys points and qualifying him for the shootout in Scottsdale, but he's not done yet.

Just within the last few weeks, Chris tells us he has found even more speed as he gets accustomed to his new setup. That is going to be very important if Chris hopes to imporve upon his 16th-place finish in last year's OUSCI. Smith aced the Detroit Speed Road Rally and finished second in the Lingenfelter Performance Design Challenge last year. The points from those two segments propelled him into the top-20 overall, but he was unable to pick up any additional points in any of the three track events.

That won't be an easy task for Smith, as he has some serious time to slice if he wants to finish in a point position on the track. In the Wilwood Speed/Stop Challenge, running a 20 flat would've given someone in last year's field a top-20 finish. Chris was only 1.014 seconds off that pace, but that put a dozen other competitors between Smith and any points for that event. Chris was less than 3.5 seconds out of a point position in the RideTech Autocross, but that difference was a whopping 21 spots out of the top-20. All the autocross time Smith has logged this year should also help, but the BFGoodrich Hot Lap Challenge could be his biggest hurdle. Last year, Smith ran a 2:06.6, but the 20th-place finisher ran a 1:57.2. Nearly nine seconds is a huge gap and in the case of the BFG Hot Lap Challenge, it was a 12-position gap.

The good news for Smith is that last year's 20th-place finisher in the Hot Lap Challenge was Brad Coomer, who was also driving a C-10 pickup. While the opportunity is there, the challenge is great. The bar is raised every year in the OUSCI and Smith knows he can't necessarily count on another high finish in the Design Challenge. Chris is gunning for a top-10 overall finish this year and if history repeats itself, he's going to need more than 40 points (out of 110) to do it. That is a big number in a field full of amazing cars and trucks, but we think Smith has what it takes to get the job done. You can see if he does it, by buying your OUSCI tickets today.

If you don't think you can make it or you want to see even more of Chris' truck, check out the Classic Trucks magazine feature on it (photographed by fellow OUSCI competitor, Rob McGaffin). You can also see a video of Smith's truck on the track (with OUSCI champ, Mark Stielow behind the wheel).

We do also want to extend our deepest condolences to Chris and the Smith family on the loss of Chris's father, Mike. Mike and Chris started Smitty's Custom Auto together and was very proud of the work he and Chris had done in the Pro-Touring community. We know he is missed greatly by Chris, but will always be fondly remembered by him, especially when he gets behind the wheel of his incredible C-10.