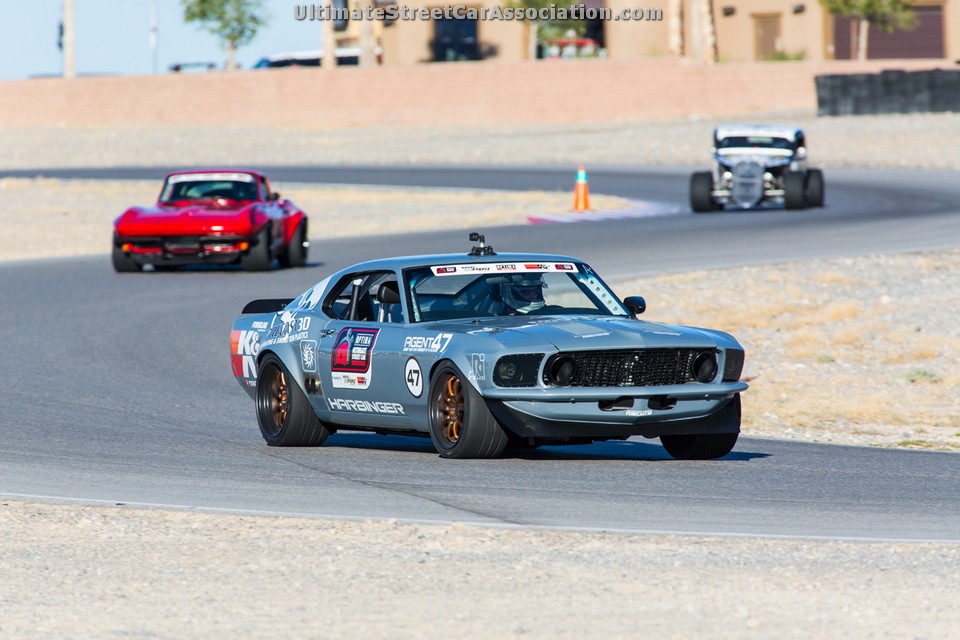 By all accounts, Corey Weber's 1969 Ford Mustang did pretty well for it's rookie appearance in the OPTIMA Ultimate Street Car Invitational, presented by Royal Purple and KN Filters. A total of 54 cars were in the running for the Ultimate Street Car title and not only did Weber's Mustang finish well, it nearly made it into the top-10, which doesn't happen often for first-time competitors. In fact, the top-9 finishers in this year's event all had previous OUSCI experience.

Weber's Mustang was also in even more exclusive company, as it was one of just seven vehicles in the entire field to score points in each of the five elements of the OUSCI. Weber (and all the other competitors who didn't win) was hoping for more points in the Lingenfelter Performance Design Challenge, but the three OUSCI points he did receive for edging out Matt Alcala's Camaro helped elevate his Mustang past Todd Treffert's Mercedes-Benz SLS and Alan Palmer's Mustang to the 11th position overall.

On the big track, Corey proved it doesn't take huge horsepower to run in the top-ten in the BFGoodrich Hot Lap Challenge, as his Mustang made it happen with just 410 ponies under the hood. Weber also edged out Todd Earsley's Mitsubishi Evo on the RideTech Autocross by just .036 thousandths of a second for ninth place. The competition was even tougher in the Wilwood Speed Stop Challenge, where Weber knocked off James Shipka's Camaro for 19th place by a mere .003 thousandths of a second!

Overall, Corey felt his results were in line with what he brought to the table in terms of horsepower and a lack of significant autocrossing experience. If he had it to do over again, Weber might've spent a little more time autocrossing and getting used to his new BFG Rivals. Overall, he thought the OUSCI had a really good field, with a lot of interesting cars and a great group of people.

The one thing that surprised him was having the opportunity to toss his keys to Randy Pobst for a few laps, while he rode shotgun. He didn't tell us how Randy's lap times compared to his own, but we know Randy bettered Bret Voelkel's best time by a full five seconds in his first experience behind the wheel of Voekel's '33 Ford Coupe. Weber said the ride-along wasn't just a fun sidebar, but the highlight of his entire week.

Corey's favorite car in the 2013 OUSCI field was that of the winner, Brian Hobaugh, who drove a 1965 Chevrolet Corvette (Corey owns a '64 himself), especially when he saw Hobaugh running on the autocross. What advice did Weber have for future OUSCI competitors? "Seat time and testing is the key."

Incredible Competition Comes Down to the Wire, as Repeat Champion, Danny Popp and his… Read More