How do you measure battery voltage? 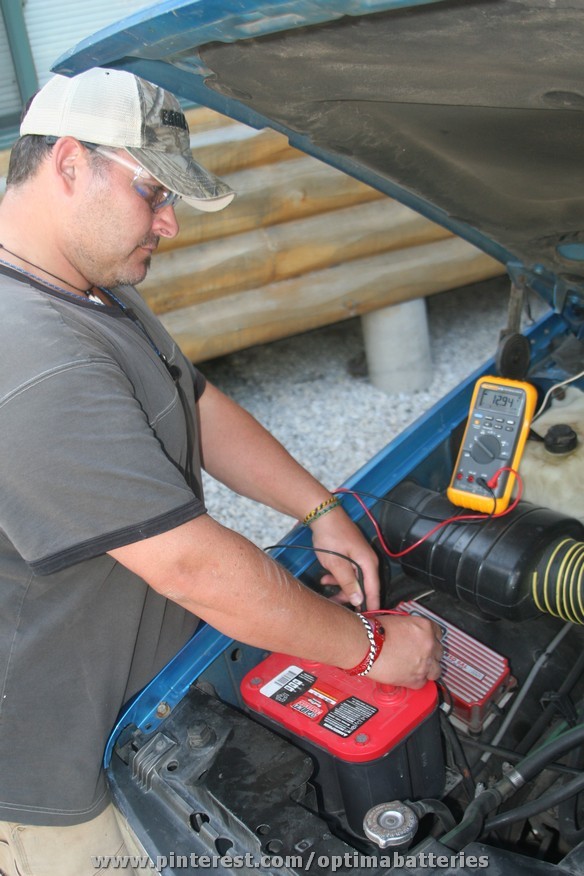 Whenever we field questions from folks about their batteries, one of the first questions we often ask of them is, "What is the voltage of your battery?" This basic information helps give us some idea of what is going on with their battery and in some cases, leads directly to the resolution of any issues they may have. However, the methods people use to measure battery voltage varies significantly and as a result, so do their answers. The most-accurate way to measure battery voltage is not through a dash-mounted gauge, but directly at the battery terminals.

We thought it might be useful for some folks who aren't quite sure about batteries and voltage, to explain exactly how someone can measure the voltage of their battery. The yellow-framed device in this picture is called a multimeter but some folks refer to them simply as a voltmeter. It can collect a lot of data, but for the purposes of measuring battery voltage, things are fairly straightforward.

Dials on multimeters can have a lot of confusing numbers and symbols, but when measuring voltage, start with looking for a "V" setting, as shown on this red-colored unit from MAC Tools. 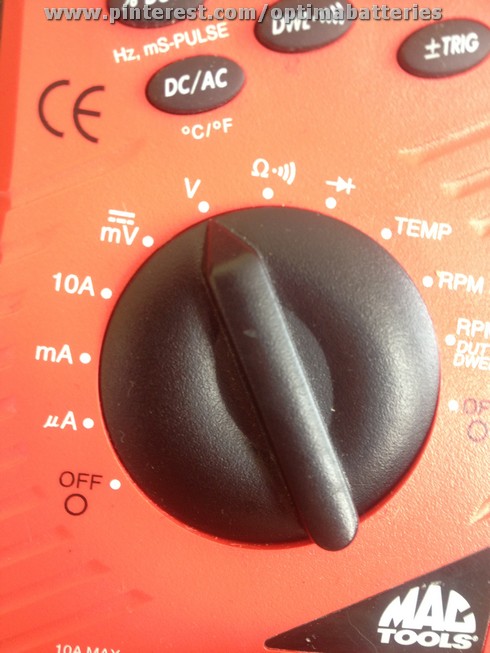 Other meters may have more complicated-looking dials with even more options and confusing numbers. The same idea still applies- you want to measure battery voltage (V), so look for the option that includes a "V" with a solid line across the top- 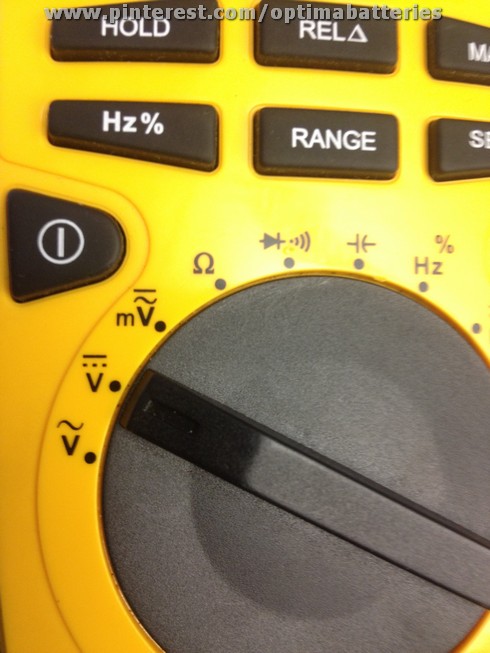 It's ok if the unit also has dashes above the V, as this unit it does, but only because it also has the solid line. Some of these meters are very expensive and have a lot of features that most of us will never need or know how to use. Other voltmeters are more reasonably-priced ($10-15 at many auto parts stores) and can pay for themselves many times over, if they help you resolve even one battery issue.

The leads on multimeters are attached to cables that are either black (negative) or red (positive). Once you have the dial on your volt meter set to measure voltage, simply touch the black lead to the negative (-) terminal on your battery and the red lead to the positive ( ) terminal on your battery. The voltage of the battery should then appear on the screen of your multi-meter as it did in the first image in this blog.

Fully-charged, our REDTOP batteries (and 34M BLUETOP) will measure about 12.6-12.8 volts and our YELLOWTOP and BLUETOP (except the 34M) batteries will measure about 13.0-13.2 volts. Each manufacturer will generally indicate a range or minimum voltage level for a fully-charged battery. If you are measuring the voltage on another brand of battery and don't know what the fully-charged voltage level should be, it is safe to assume it should be at least around 12.6 volts.

Because there are a multitude of variations (how the battery is made, the age of the battery, etc...) that can factor into what a battery's full state of charge should be, we always indicate battery voltage should be in a range, rather than an exact number. For example, an eight-year old REDTOP that measures 12.57 volts may be fully-charged, while a brand-new REDTOP may measure 12.92 volts. Both are considered acceptable.

Batteries that have just been charged with a battery charger or those that are in vehicles that was just driven may have a surface charge, which will result in voltage readings higher than the true voltage of the battery. Letting a battery sit on a bench for 12-24 hours can allow that surface charge to dissipate. For batteries installed in vehicles, turning the headlights on (with the engine off) for 30 seconds can also remove a surface charge.

Finally, as a safety reminder, batteries and automobiles in general can pose some inherent safety risks. Whenever you are working with or around car batteries, be sure to take all necessary safety precautions, which includes working in a well-ventilated area and using protective eyewear

Can I Use a Regular Battery Charger on an OPTIMA battery?

Can you charge an OPTIMA battery with a regular battery charger? Probably, but should… Read More