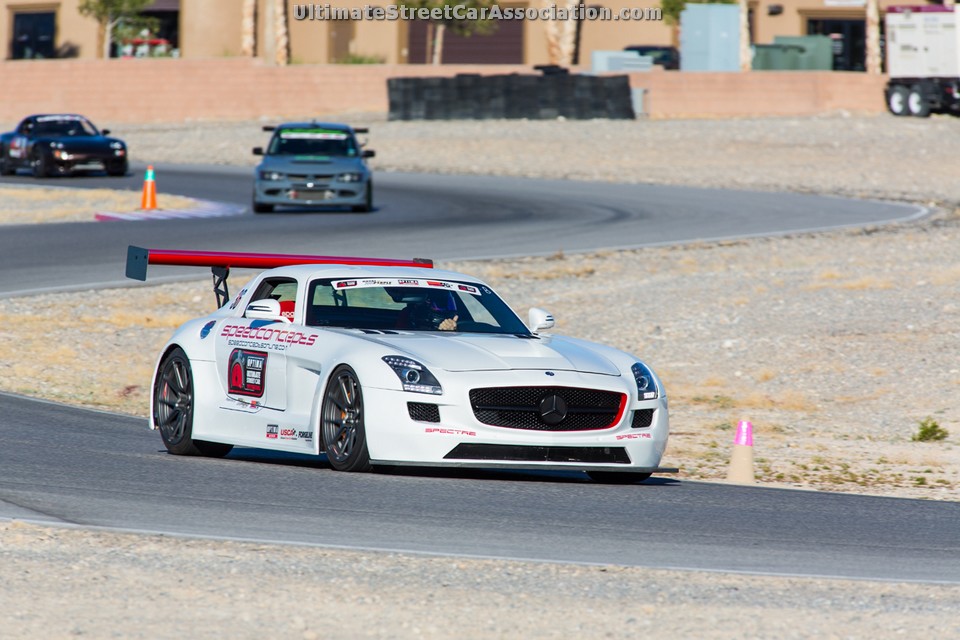 The field for the 2013 OPTIMA Ultimate Street Car Invitational, presented by Royal Purple and KN FIlters, was as diverse as we've ever seen, with German automakers represented by seven different entries. One of those vehicles was Todd Treffert's 2012 Mercedes-Benz SLS and his first trip to the OUSCI has to be considered successful by just about anyone's estimations.

Treffert had no issues, mechanical or otherwise, on the Detroit Speed Road Rally, which netted him 10 points. The theme of the SLS impressed the judges in the Lingenfelter Performance Design Challenge, where the Benz picked up 13 points with an 8th-place finish. Todd did even better in the BFGoodrich Hot Lap Challenge, where he edged out Karl Dunn's Camaro by just .066 thousandths of a second for 7th place and 14 points. That performance elevated Treffert to a 12th place overall finish in the 2013 OUSCI- very impressive for a first-time effort.

Treffert's margin of victory over Dunn's Camaro was somewhat equalized by the margin James Shipka's Camaro held over Todd's SLS in the Wilwood Speed Stop Challenge- just .072 thousandths of a second for 20th place and the final point position in that event. The gap between Treffert's 26th-place finish in the RideTech Autocross and 20th place was slightly larger than the other events, but still barely more than a half second behind Richard Caleel's 20th-place Cadillac CTS-V.

Even though we were impressed with Todd's efforts, Treffert was hoping for an even higher finish. The only unexpected glitch in his entire journey came when he unloaded his car for SEMA and it immediately went into limp mode. Fortunately, the issue only turned out to be a crimped wheel speed sensor. Todd was very thankful it wasn't more serious and very appreciative of the folks from Snap-On, who let Todd use one of their scanning tools to diagnose the problem and clear the troublesome codes.

If Treffert were able to do it over again, he tells us he'd make more of an effort to get seat time in his car. "I only had about a week of total driving experience in this car, prior to coming to the event," admitted Todd. The only thing that really took Todd by surprise at the event was the amount of gifts competitors received, including their very own trading cards, MAC Tools and plenty of OPTIMA swag. Todd seemed to really enjoy himself and offered that same advice for future competitors.

As many others have said, Brian Hobaugh's Corvette impressed Treffert the most of all the cars in the OUSCI field, but Todd was really blown away by the diversity of the field. "It's kind off cool to see a Mercedes SLS pull up alongside and compete with a Corvette from the 1960s," says Treffert. We wholeheartedly agree and thank him for bring his SLS out to hav some fun with us!