Todd Gets Behind the Wheel of the OPTIMA Top Fuel Dragster 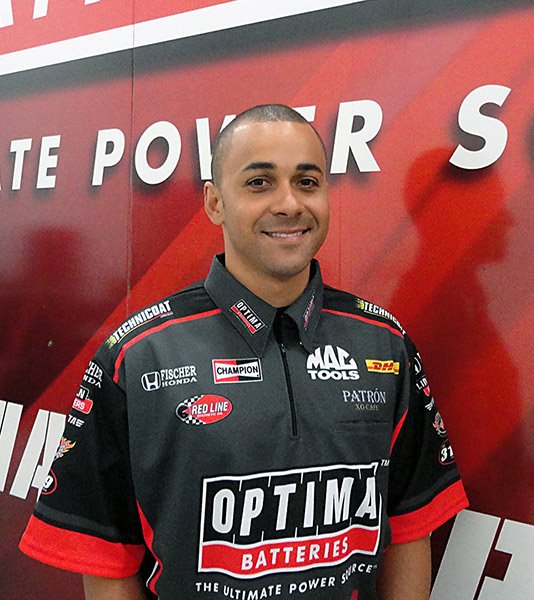 Kalitta Motorsports, one of the largest and most successful teams in NHRA (National Hot Rod Association) professional drag racing history, announced that six-time NHRA Top Fuel event champion J.R. Todd will assume the duties of full-time driver of the OPTIMA Batteries Top Fuel dragster beginning at the next event of the 2014 Mello Yello Drag Racing Series, the 5th Annual NHRA Four-Wide Nationals at zMAX Dragway in Charlotte, North Carolina on April 11-13.
Team owner, crew chief and drag racing icon Connie “the Bounty Hunter” Kalitta made the decision to change direction with his dragster by tapping Todd to drive his Top Fueler during the previous event, the 15th annual SummitRacing.com NHRA Nationals in Las Vegas.
Todd, a 32 year-old resident of Lawrenceburg, Indiana, has accumulated six wins in eight final round appearances in NHRA Top Fuel competition. He began his straight-line racing career in the NHRA Jr. Drag Racing League, where he competed from 1993 until 1998. After serving as a crew member on a Nitro Funny Car team from 2003 until 2005, Todd got his chance to drive at NHRA’s highest level, Top Fuel, in 2006. He earned his first career Top Fuel trophy in 2006 in Denver to become the first African-American to win an NHRA Top Fuel race. His most recent victory in NHRA Top Fuel was in Dallas in 2008.
“To say I’m excited to be a part of Kalitta Motorsports is a huge understatement,” said Todd, who most recently drove a Top Fueler for Bob Vandergriff Racing in Gainesville, Florida. last month. “Driving for Connie Kalitta is a great honor. Connie’s commitment to success is one of the big reasons he’s considered one of the best owners to work for. He’s been drag racing for over 50 years so I’m sure I will learn a lot from him, and hopefully drive his car to a lot of winner’s circles for OPTIMA Batteries.”
The OPTIMA Batteries Top Fuel dragster was previously driven by David Grubnic. Native Australian Grubnic, a 51-year old resident of Bozeman, Montana, will remain with Kalitta Motorsports as a technical consultant. "We couldn't have asked for a better representative for our brand than Grubby," said Cam Douglass, Director of Product Development and Marketing for OPTIMA Batteries. "He has been a great ambassador for us with race fans, as well as our employees and partners. We know J.R. is very capable in every regard and we hope this new direction will be a positive move for everyone involved."
“We knew we were eventually going to move Grubnic into a more technical role,” Jim Oberhofer, vice president of operations for Kalitta Motorsports, said. “It just so happened that the timing was right for Connie and the team to do that now. We are very confident that J.R. will represent our team, OPTIMA Batteries, and all of our sponsors to the utmost of his ability. We’re extremely excited to see what he can do driving for Kalitta Motorsports.”
OPTIMA Batteries will remain the primary sponsor on Todd’s dragster for 19 of the 20 national events remaining in the 2014 NHRA Mello Yello Drag Racing Series schedule, as well as an associate sponsor on Doug Kalitta's MAC Tools Top Fuel dragster, Alexis DeJoria's Patrón XO Cafe Toyota Camry Funny Car and Del Worsham's DHL Toyota Camry Funny Car- all from the Kalitta Motorsports stables. OPTIMA Batteries is also an official NHRA contingency sponsor.

There are always incredible cars and trucks on display at the SEMA Show. See highligh… Read More