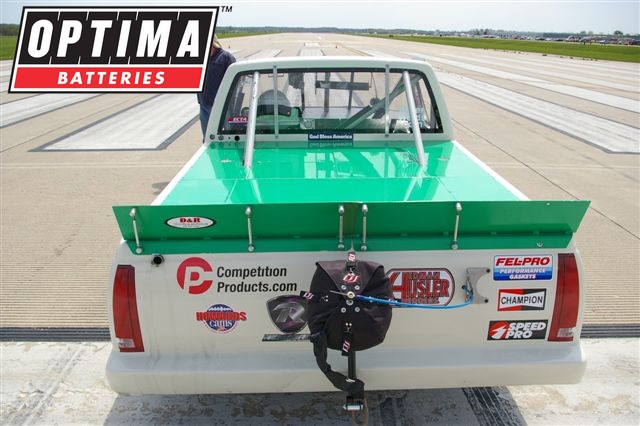 OPTIMA-sponsored drag racer, Phil Veldheer is certainly no stranger to speed. After all, he in an eight-time IHRA record holder. However, Phil decided he wanted to branch out and give land speed racing a try. The speeds alone are a major commitment, but for many of the events, just getting to the course itself is also a major commitment, as many of these events are held in the wide-open spaces only found in the Western United States.

However, the East Coast Timing Association has put together some events East of the Mississippi, opening this genre of racing up to a whole new audience, including Michigan-based racers, like Veldheer. Phil recently made the relatively-short drive down to Wilmington, Ohio for the ECTA's Spring meet.

It was his first foray into such racing, but he came away successful and excited about the prospects of doing more. As one might expect when vehicles are running at such incredible speeds, tech inspection is an all-day affair. After making a couple of minor changes, Veldheer was ready to get his 125 mph license on Saturday. High crosswinds closed down racing at 4PM, but Phil was able to make a 125 mph qualifying run to secure his license at that speed.

With his 125 mph license secured, Veldheer then laid down a 154 mph pass the next day to grab his 150 mph license. At 5PM, he lined up for his 175 mph license, which required a parachute for stopping, but upon taking off, he knew his clutch was through and he called it a day. We're excited to see Veldheer progress in this new discipline and wish him continued success!

The demolition derby at the 2017 Marshall Putnam brings new meaning to the term, "the… Read More