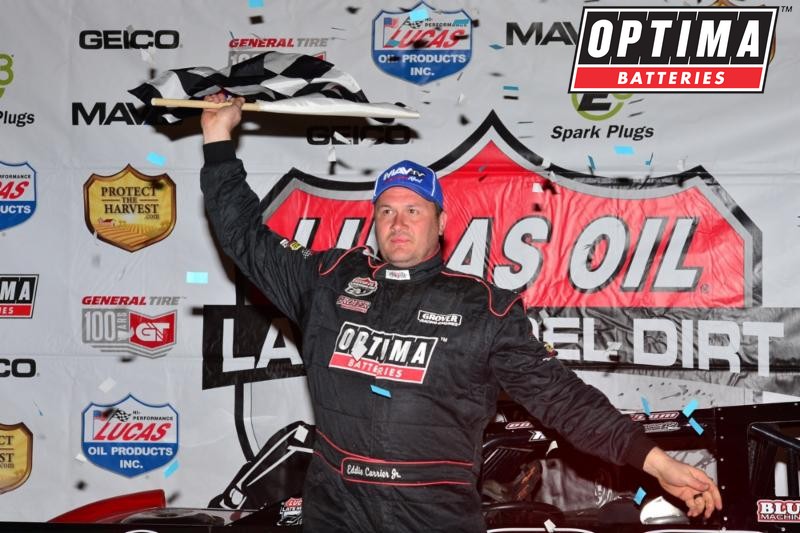 “I want to thank my car owner, Carl Grover. He gave me the chance several years ago to drive his cars, and it has been the best thing to ever happen to me, other than marrying my wife, Jamie,” said Carrier Jr. “I have to thank OPTIMA Batteries, Engines Inc, Sunoco Race Fuels and all of my sponsors, my crew, and especially my dad (Eddie Carrier Sr.) for all he does. He works his tail off every day on this car," says Carrier Jr.

In preliminary action, Eddie posted the fastest lap in Group B of LOLMDS time trials, earning the pole position for his heat race. Carrier Jr. would later finish second in his heat race behind Jared Landers, which locked him into the sixth starting spot for the evening's 50 lap main event. Carrier Jr. took the lead from Moran on lap 31, only to see Moran assume the point again one circuit later. Eddie used lapped traffic to his advantage, taking control for the final time on lap 44. He led the final six laps en route to victory over Moran, Jimmy Owens, Jared Landers and Jonathan Davenport.

Throughout the course of the week at East Bay Raceway Park, Carrier Jr. posted three top-ten finishes including the victory. The team now turns their attention to March 20th-21st, when LOLMDS competition resumes with events at Atomic Speedway (Chillicothe, Ohio) and Brownstown Speedway (Brownstown, Indiana).

For the latest information on Eddie Carrier Jr., please visit www.EddieCarrierJr.com. You can also follow him on Twitter.

OPTIMA-sponsored Eddie Carrier Jr. Goes for it at Eldora