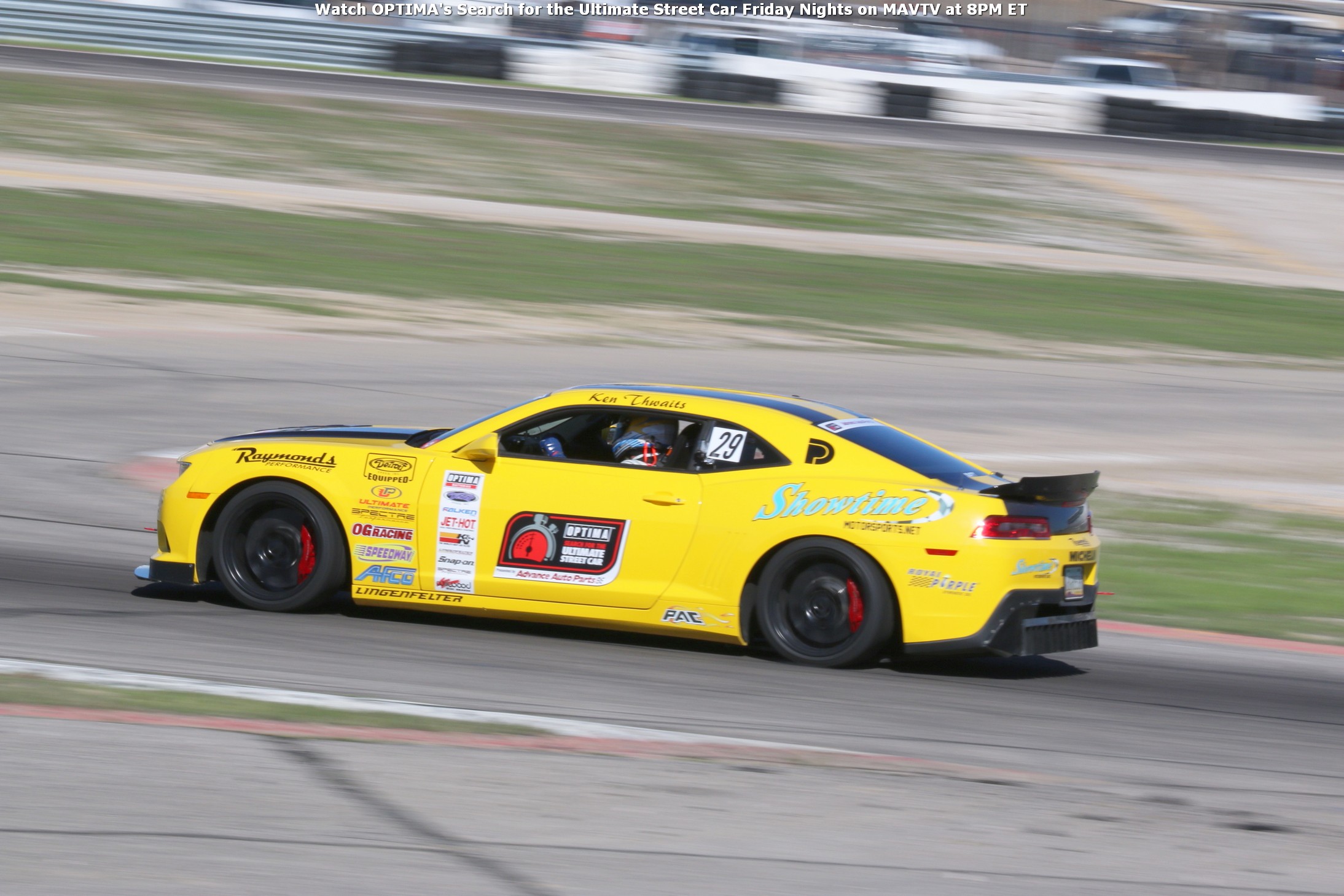 The idea of posting a $3,000 bounty on his own head came to Ken Thwaits one night in early-February. When he woke up the next morning, he grabbed all the cash he could find, took a picture in front of one of his Camaros and announced his ponycar challenge to the world as a way to entice newcomers into OPTIMA's Search for the Ultimate Street Car series. Thwaits runs in the GT class, which is for 1990 and newer vehicles with a minimum 3,200-pound curb weight for two-wheel drive sedans, four-seater coupes late-model trucks. Drivers new to the series in either Ford Mustangs or Dodge Challengers built after 1989 all have a shot at the $3,000 bounty Thwaits has placed on his own head for beating him and winning the GT class. For full rules for both drivers and cars, click here. The first one to finish ahead of Ken at any one of OPTIMA's Search for the Ultimate Street Car events will take home $3,000 cash.

It seemed like a simple enough concept and there was little doubt some folks would give it a shot, but the question was how many would be up to the task? The first OUSCI qualifier at Thunderhill Raceway was less than a month away from the initial announcement, so while overall attendance was strong, only a handful of Mustangs ended up being eligible for the bounty. They were well-prepared Mustangs, including a 302 Boss and a GT with the factory's Track Pack upgrades and they were driven by experienced drivers, who were familiar with the venue. They gave Ken a run for his money, but by the end of the weekend, Thwaits had picked up his first qualifying event victory ever and the bounty carried over to the March event at Texas Motor Speedway.

There were a couple of factors that suggested Texas would be a tougher challenge for Thwaits. One was the additional time potential competitors had to hear about the event, get signed up and get their cars dialed in. Another factor was the folks from Vorshlag Motorsports, which is based in Texas. Terry Fair, the owner of Vorshlag, beat Thwaits at this event last year in his shop's 2011 Mustang, qualifying Fair for the 2014 OUSCI in Las Vegas. However, because Fair had competed in the past, he was not eligible for the bounty.

However, Fair's wife, Amy, who is a regular competitor in NASA Time Trial competition and a three-time SCCA National Champion autocrosser, had never competed in an OPTIMA event before. Vorshlag also invited several other customer cars to come out, all well-prepared and driven by very capable folks. All told, more than half of the two dozen cars competing in the GT class were first-time competitors in Mustangs and eligible to win the bounty. Still, even with all that competition and a shifter issue at the beginning of the Falken Tire Hot Lap Challenge, Thwaits managed to beat everyone but OUSCI regular, Ryan Mathews, who was piloting Detroit Speed's 2010 Camaro and picked up the GT class win.

Have these first two events scared off the competition? We hope not, as Mathews and many others have proven on multiple occasions that while Thwaits is very good, he hasn't been as dominant or unbeatable as Kentucky's basketball team has been up until now. While we're still several weeks out from the next event in Las Vegas, the entry list so far for the GT class shows the only Mustangs entered are being piloted by series veterans, who are not eligible for the newcomer bounty.

The OUSCI qualifier at NCM Raceway on June 6-7th does have several first-time Mustang competitors registered already, but still no Challengers. In fact, it's not until the following event at Michigan International Speedway on June 20-21st, that a Challenger finally shows up on the entry list and a 2015 Hellcat at that! Moving further through the schedule, we don't see any additional newcomers registered in Mustangs or Challengers until Pike's Peak on August 8-9th. There are a few more Mustangs registered at other events through the rest of the season, but that will likely change as we approach each event. If Ken's performance continues to extend from one event to the next, as it has done through the first two contests, the questions of why no Challenger or Mustang owners can take him down will continue to be asked even more loudly.

The response to Ken's challenge from the Ford and Dodge camps has been very loud so far, but it's mostly just been talk, much of it coming from people who don't even understand these events don't take place on a drag strip or a chassis dyno. Thwaits has suggested the lack of response on the Dodge side might be due to the fact that so few Challengers are on the road, but their V8 production numbers are well in excess of 100,000 vehicles now. Even if the vast majority never did anything more than polish their cars, if one tenth of one percent of those owners were willing to track their cars, that would still be dozens of potential competitors.

The Mustangs are more of a mystery, as those cars have been very popular platforms for decades in all sorts of competitive racing from SCCA autocross events to American Iron races. Given the continuous production of the Mustang and the sheer number of people competing in them, it must have a vast pool of talented drivers and with the weight advantage it typically has over the Challenger (and often the Camaro), it would likely make it a more credible threat to capture the ponycar bounty. Still, as Ken almost proved last weekend, you must first finish in order to finish first and he nearly didn't, when a shifter issue sidelined him at the beginning of the Falken Tire Hot Lap Challenge.

Had Thwaits failed to finish the event (or any event in the future), even the heaviest, slowest V6-powered Challenger may have beat him and pick up the $3,000 bounty. Thwaits does have as many DNFs on his resume as wins, so anything is possible and a first-timer with no prior track experience could end up taking home the bounty if Thwaits is unable to finish an event.

Even without the opportunity to pocket $3,000 in cash, OPTIMA's Search for the Ultimate Street Car events are about as much fun as anyone can have legally in their cars. They take place at tracks across the country, so there's a good chance one of these events is coming to a track near you. Jet Hot Performance Coatings also provides complimentary driving instructors at every event, so even if you've never been on a track before, there will be someone there to guide you through the experience. Check out www.DriveOPTIMA.com for upcoming dates and locations. You can also catch OPTIMA's Search for the Ultimate Street Car TV series every Friday night at 8PM ET on MAVTV.