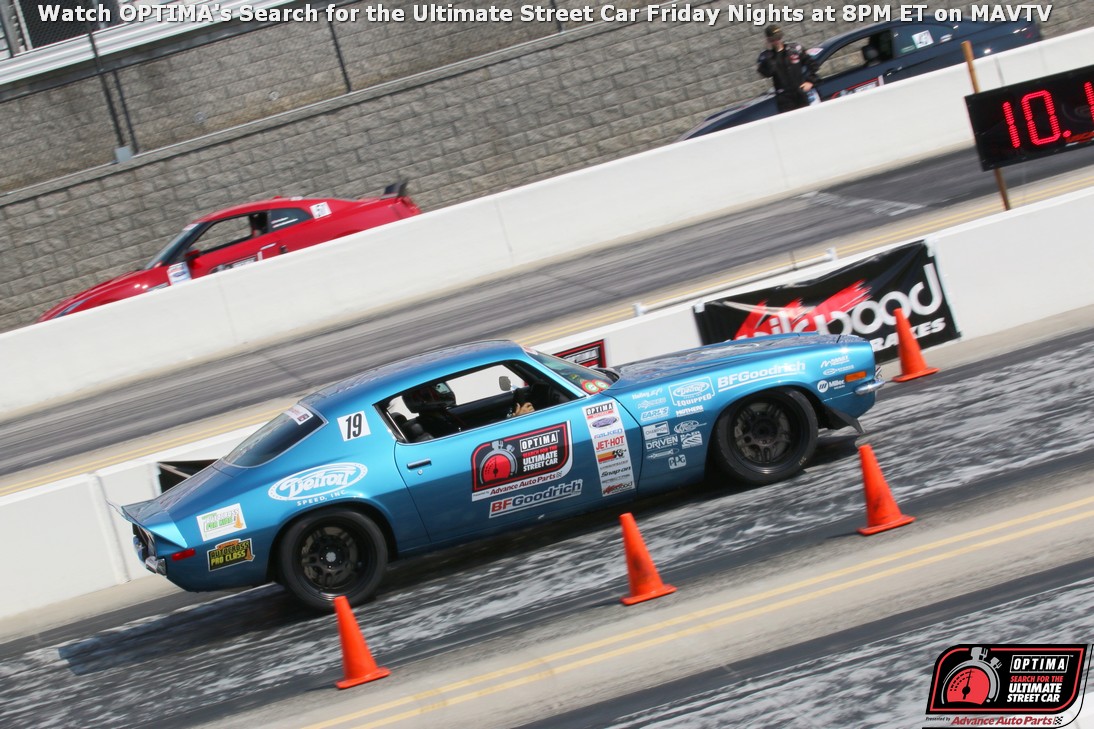 We were originally going to post one blog about all the goings on in OPTIMA's Search for the Ultimate Street Car Invitational, presented by Advance Auto Parts, but there's so much information to share, we decided to split it up into one blog for each class, followed by a blog discussing the top-15 in points, who haven't already qualified, as well as the first five cars on the outside looking in.

As a refresher for those who are new to the series, OPTIMA's Search for the Ultimate Street Car culminates in Las Vegas each year, with the annual SEMA Show and the OPTIMA Ultimate Street Car Invitational, which takes place at the Las Vegas Motor Speedway on the weekend after SEMA. Qualifying events are run all year long at tracks all over the country and competitors in four different classes receive invitations at each qualifier, as well as one competitor at each event, who receives the KN Filters Spirit of the Event invitation (and a really cool helmet).

In addition to those entries, the top competitor in each of the four classes, who has not already received an invitation to SEMA and the OUSCI will receive one based on season-long series points, as well as the next 11 competitors based on points, regardless of class.

Once the field arrives in Las Vegas, ten additional entries are selected from the SEMA Show floor to compete at LVMS and the field is set. Competitors square off in three different track events- the Detroit Speed Autocross, the Wilwood Disc Brakes Speed Stop Challenge and the Falken Tire Road Course Time Trial. Competitors also score points in the Lingenfelter Performance Style Design competition and the road rally, which proves that all of these street-legal vehicles can be driven on public roads on the same 200+ treadwear tires they will use in competition.

In addition to all the excitement surrounding the happenings in Las Vegas, there are also regular season class titles on the line and the competition is only getting tougher with each event. OUSCI regular, Kyle Tucker, finally punched his 2015 ticket to the big show after winning the GTV class in his 1970 Chevrolet Camaro at Charlotte Motor Speedway. That victory also propelled him ahead of Chris Porter's LS-powered 1986 Porsche 948 and into the lead in GTV points. Tucker has a lead of nearly 85 points over second-place Porter, but there are still opportunities for the standings to change before the end of the season.

The top-six competitors in GTV have all run two double-points events and with a third one still on the schedule in Fontana, the championship likely won't be decided until the final event is run at Auto Club Speedway in October. The kicker is that Tucker is based in North Carolina, which would mean he'd need to get his Camaro all the way to California and run well in the final event to assure his regular season championship. Tucker posted the highest total of the season so far in Charlotte with 228.2667 points and using that number as a possible score in Fontana, several competitors are very much in the hunt to catch and pass him if they run at Fontana and Tucker does not.

Chris Porter and Larry Woo both have a shot of eclipsing 600 points if they run at Fontana. Mike Maier would have to run well at Fontana to catch and pass Tucker, but his 116.9-point performance at Las Vegas Motor Speedway suggests he is certainly capable of doing just that. Chris Smith's 121.5-point performance at Texas Motor Speedway makes the math work for Tony Grzelakowski to also capture the title and while sixth-place Keith Corrigan's '68 Camaro would be a long shot to catch and pass Tucker in the final event, the math could work in his favor, depending on who registers for that event.

Even if they don't catch Tucker, the top-six all have the potential to easily finish the season with 450 points, which is a number that will become more important as we go through the other classes and count up the points entries, especially because only Tucker and Maier have secured entries so far for the OUSCI. Will anyone be able to catch Tucker on the track and in the points chase? We'll find out! You can be a part of the action by signing up to run your street car at www.driveoptima.com

Todd Rumpke's Corvette has won it all and it has changed significantly for 2013. Find… Read More