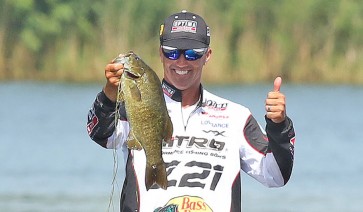 WADDINGTON, N.Y. — Confidence means a lot to a tournament bass fisherman, and Oklahoma pro Edwin Evers said his was sagging a bit after a couple of tough events earlier this year.

A win last month at BASSfest made Evers feel much better — and with a renewed sense of confidence, he went out and claimed his second victory in a row in this week’s Evan Williams Bourbon Bassmaster Elite at St. Lawrence River.

With a four-day total of 77 pounds, 10 ounces, Evers became the first angler to win back-to-back events in the 10-year history of the Elite Series. He cemented the victory with a Sunday catch of five smallmouth bass that weighed 17-8.

Evers said the victory at BASSfest — and the automatic berth into the GEICO Bassmaster Classic that came with it — played a major role in his New York strategy.

“Last time we were here, I went upriver every day,” said Evers, who chalked up his 10th career B.A.S.S. victory at Waddington. “But I didn’t think I could win there. I felt like this year coming back, everybody was going to try to go that way and get as close as they possibly could to where Brandon Palaniuk won the last time we were here (in 2013). So I went the other direction, and it was hard.”

Evers said he fished extremely long days during practice, taking advantage of a northern sun that often stays out from 5 a.m. to almost 10 p.m. But despite the long hours, he only got seven bites the first day of practice, four the second day and seven the third day.

He said he stuck with his decision, partly because his Classic berth is already in the bag.

“It made it a lot easier to do what I did this week, because I was not getting many bites,” Evers said. “It was a do-or-die deal. To finish 25th the last time we were here was decent, but I wanted a chance to win.”

Evers caught his fish drifting shallow areas where he could see smallmouth feeding in the glass-clear waters of the St. Lawrence. He said he probably used 20 different lures, and even the ones that didn’t produce bites often helped him locate fish that chased the lures back to the boat.

His top producer was a wacky rigged Zoom Fluke Stick in a green pumpkin color. He also used a Megabass Spark Shad swimbait in ayu, a Zoom called a Z-Drop worm, a Megabass X80 jerkbait, a white/silver/gold War Eagle spinnerbait, a small hair jig and a Zoom Speed Craw.

He fished all of the baits on the lightest line possible, using 6- and 8-pound braid all week.

“I could probably name three or four more baits that I caught good fish on this week,” Evers said. “I’m serious when I say I probably had 20 rods laid across the front of my boat, and they all helped me in some way.”

The swimbait often paved the way for him to land fish on the Fluke Stick.

“There were times when I’d throw that swimbait out there, and the fish just wouldn’t commit to it,” Evers said. “But when they’d follow it back to the boat, I would know they were there and I could really go to work on them.”

Sunday’s catch of 17-8 marked the second straight day that Evers failed to break the 20-pound mark after topping it his previous six times on the water. But with the rest of the field fading, he still left with the win.

A 94th-place finish on the Sabine River in March and 55th on the Sacramento River in May put Evers in a tough spot in the Angler of the Year race. But with a third-place finish at Lake Havasu in May and now his back-to-back victories, he’s moved into fourth place in the AOY standings, trailing leader Aaron Martens by 76 points.

As for becoming the first angler to win back-to-back events on the Elite Series, Evers said it might be next week before it actually sinks in.

“It hasn’t hit home yet,” Evers said. “It’s amazing. I can’t believe it. I know some buddies of mine are going to be really upset with me because I told them I didn’t have a good practice, but I really didn’t.
“It just all came together this week.”

The crowds got larger each day as North Country bass fishing fans turned out in droves to watch Evers make history. Waddington, N.Y., came close to breaking its own Elite Series attendance record of more than 34,000 set in 2013 at the Evan Williams Bourbon Showdown.
Bonuses and Contingency Awards: