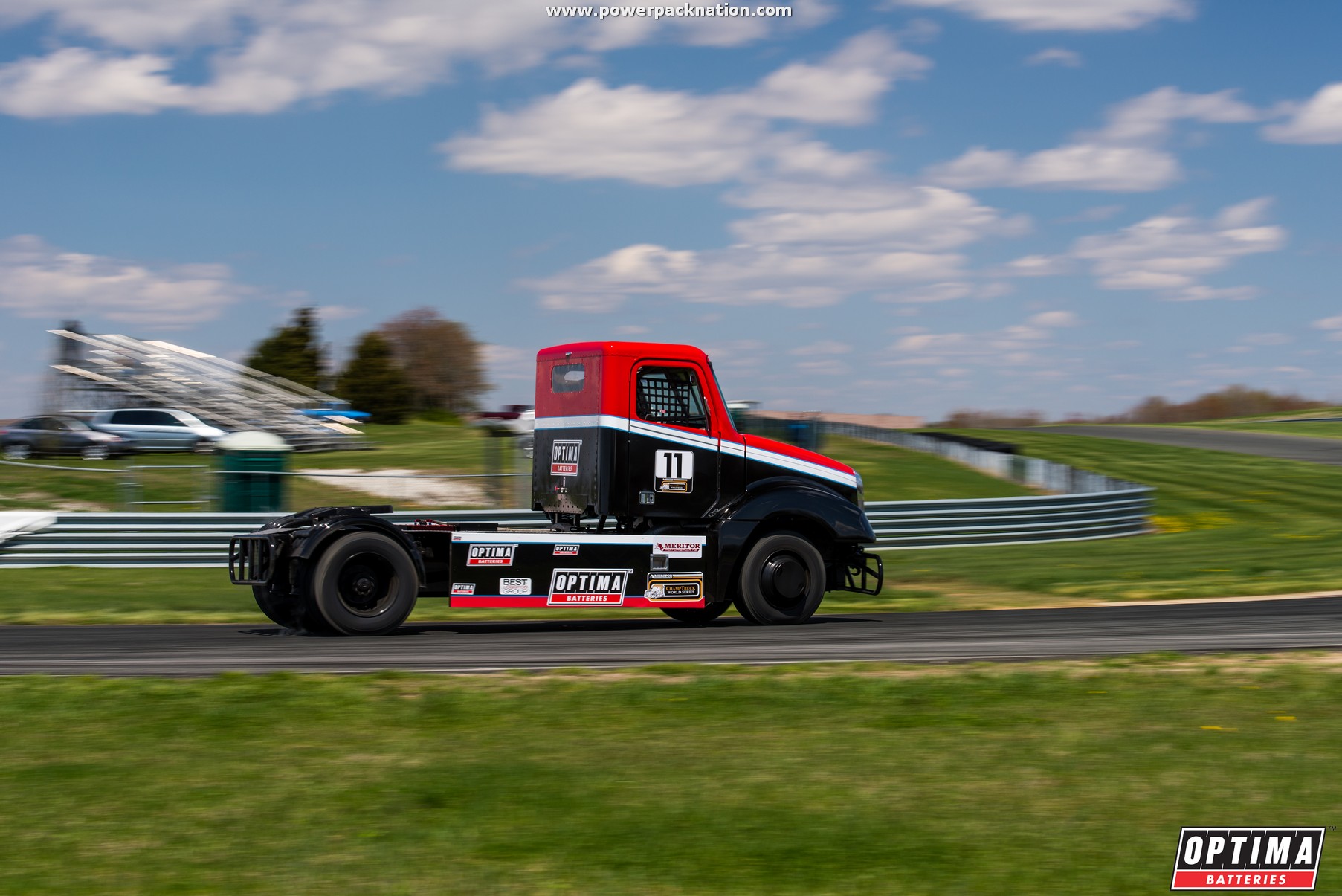 The race series continues with the familiar teams of Jupiter Motorsports and driver Ricky Rude in his #14 Peterbuilt and Allen “Turbo” Boles in his black and lime green #3- Peterbilt. Brad Klemmensen, represented Team Minimizer in the #54 Volvo, “Tested” while Teammate Trevor Kruckeberg was already having a rough start in practice when the front tires began shaking of his #63 Volvo, “Tortured”. The culprit being the wrong front brake drum. Unfortunately needing to get the proper parts he was also unable to make it out to the first heat race of the day.

It was good to see that Krisztian Szabo and Truck Racing Team USA made it out to VIR after the wreck at Gateway Motorsports Park where his truck spun out, brakes locking up, sending him up and over the K-Rail. The team had just two weeks to repair the front bumper guard, repair body work, new hood, front chassis repair, new radiator, etc. in order to get the truck ready.

Exodus Motorsports of Mooresville, North Carolina was looking to make their third race of the season. Driver, Robbie Decker and his team have over 25 years in the trucking industry but this is their first foray into racing. They were first introduced to the concept when they came out to help the #11 OPTIMA Batteries truck at the New Jersey race. They left New Jersey and within two months had their truck built and made their debut at Charlotte Motor Speedway.

As always #88 Mike Morgan and his Powershift Performance Race Team’s big black MACK was looking to go big, go wide and go fast. New to the seat of OPTIMA Batteries-sponsored #11 Freightliner Columbia was ChampTruck Mechanic Ron McConnell. With the field of drivers set and ready to conquer the 2.25-mile North Course of what is known as one of the most-challenging and unique road courses in the country. Krisztian Szabo, of Team USA #23 Volvo came out in qualifying with the fast time of 2:05.454 to let everyone know that he had bounced back from the wreck at Gateway.

As the trucks reported to grid with the #23 of Truck Racing Team USA on the pole, the first heat race got under way. However it didn’t take long for Boles to take over first place and not look back. Szabo was trying to make the pass, but Boles held the defensive line and shut the door on Szabo. With Boles leading the trucks out of turn 19 down to the straightaway, Brad Klemmensen had taken over second place. Meanwhile, truck #23 was nowhere in sight which brought out the caution flag for safety crews to recover the #23 truck. It appeared that they had a clutch failure in the truck.

As green flag racing resumed, Boles still had an aggressive lead however, Morgan had taken over second place from Klemmensen. This time it was Klemmensen who appeared to be missing. He ended up locking up his brakes and they didn’t release in time, which cost him four positions. Allen Boles went on to take the checkered flag for his fifth race win of the season.

With the second heat race just underway, Trevor Kruckeberg in the #63 truck, finally got to see the track for the first time since practice. However, his visit was very short-lived. Coming into turn one, it appeared he came into the apex too late and overshot the turn and went straight, stopping just before the tire wall. Ricky Rude of the Jupiter Motorsports team was having his own issues, as it appeared the truck was not firing on all cylinders and having power issues. Truck Racing Team USA and their #23 and #88 trucks were having their own battle down the straight away with Morgan trying to get around on either side with #23 truck closing the door every step of the way. Morgan was finally able to open the door going into turn one and made the pass. He then went on to hold the position into turn two and took a two-trucklength lead over the #23 truck. The OPTIMA Batteries Truck #11 also appeared to have issues with the brakes overheating and pulled off the track. Doing what he does best, Boles started the #3 truck in the back and quietly and quickly picked off each truck one by one, finally taking the lead away from Brad Klemmensen to take his second win of the day.

As the third heat race got underway, everyone was wondering if this was going to be a Boles podium day, where he swept the podium? Boles again started at the back, so he had his work cut out for him. Szabo starting on the outside of the second row didn’t take long to make his move on the outside of Ron McConnell in the #11 OPTIMA Batteries truck to take the lead. Morgan was all over the bumper of McConnell but just could not get the opening that he needed to make the pass. As Morgan was making his move, he took the turn too wide and got off track for a little agriculture racing and dropped from third to sixth. In the meantime, Boles again was quietly picking off trucks one by one and currently was running in fourth place. Boles was threatening to take over third and before he could make his move on Decker, Decker decided he also wanted to try agricultural racing and took turn one too wide which gave Boles the opening he needed to take over third place. Decker not able to find the proper gear quickly dropped from third to fifth place. Unfortunately for Boles, time ran out and he finished third with Kriszten Szabo taking the win for Truck Racing Team USA.

As day two opened for the Meritor ChampTruck World Series it was going to be another amazing day of racing at VIR with cool temperatures, which is unheard of in Virginia in August. With the fourth heat race getting the green flag, it was Robbie Decker in only his second race of the season, showing that you can teach old dogs new tricks. Starting in the second row on the outside, Decker decided to try and take the inside line heading into turn one, to make the pass over Brad Klemmensen in the #54 truck for first place. Decker had a promising lead over the rest of the pack, with Mike Morgan #88 turning the fastest lap time of the weekend with a 2:03.676. It didn’t take long for Morgan to cut that distance down and take the first place position.

Meanwhile, showing there is no love lost between teammates, Rude and Boles were doing a little bumping rubbing with Boles taking the fifth spot away from Rude. With the white flag being shown, it was one last attempt for Boles to take away the fourth position from Klemmensen with a last-ditch drag racing move down the straightway with Boles on the outside but Klemmensen held the line to keep fourth by a half a cab's length.

The fifth heat race began with a driver change in the #11 OPTIMA Batteries Truck, with that of ChampTruck’s own Mike Ryan at the wheel. Sitting on the pole, Ryan took the start with the #63 truck of Trevor Kruckeberg and working their way out of turn one into turn two, Kruckeberg went off course and couldn’t get it straightened out, losing several positions. Allen Boles currently in second, was right on Ryan’s heels trying to take the inside line but with Ryan taking the perfect line was able to hold him off. The track ended up going to a full-course yellow because of debris on the track, which made for a very interesting re-start with all the trucks grouped back up together. This was the break that Boles needed as Ryan was breaking away from the pack. Szabo followed Ryan’s lead on the re-start and got a jump past Boles for second. With time running down in the race, Szabo made a last-ditch effort and successfully made the pass to take over first, as they came down over the hill into the straightaway.

The podium race didn’t disappoint and proved once again, that the race isn’t over until you've crossed the finish line. Until that happens, positions can change in a heartbeat. Right from the start and going from turns one and two, Robbie Decker and Brad Klemmensen went wide and off into the dirt. Boles did what he does best and took advantage of their miscue and plowed to the front to take the lead with Mike Ryan in the #11 OPTIMA Batteries truck right on his heels.

With Kruckeberg still having issues with his truck, Morgan and Szabo took advantage and passed cleanly by. Boles had a huge lead over second place. However, due to a full-course yellow that lead was quickly erased. Boles, not going to let this opportunity pass him by like he did on the previous race, threw the hammer down, took the green flag and went full boar. Now the race for second place was between Morgan and Szabo, with Szabo making the inside move coming over the hill down onto the straightaway. With the white flag being displayed, it was a defensive game now of just maintaining speed and control, but that would not be the case for Mike Morgan who spun out in turn one and went from a third place podium spot to fifth. The weekend ended up going to Allen Boles, who once again took the checkered flag for the win.

How Much HP Do Pulling Tractors Have?

Take a virtual tour of Sullivan Pulling, one of the first families of tractor pulling… Read More 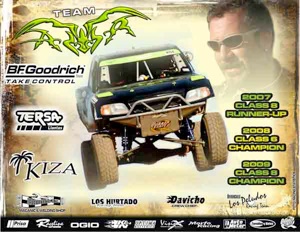 2016 King of the Hammers Album Two