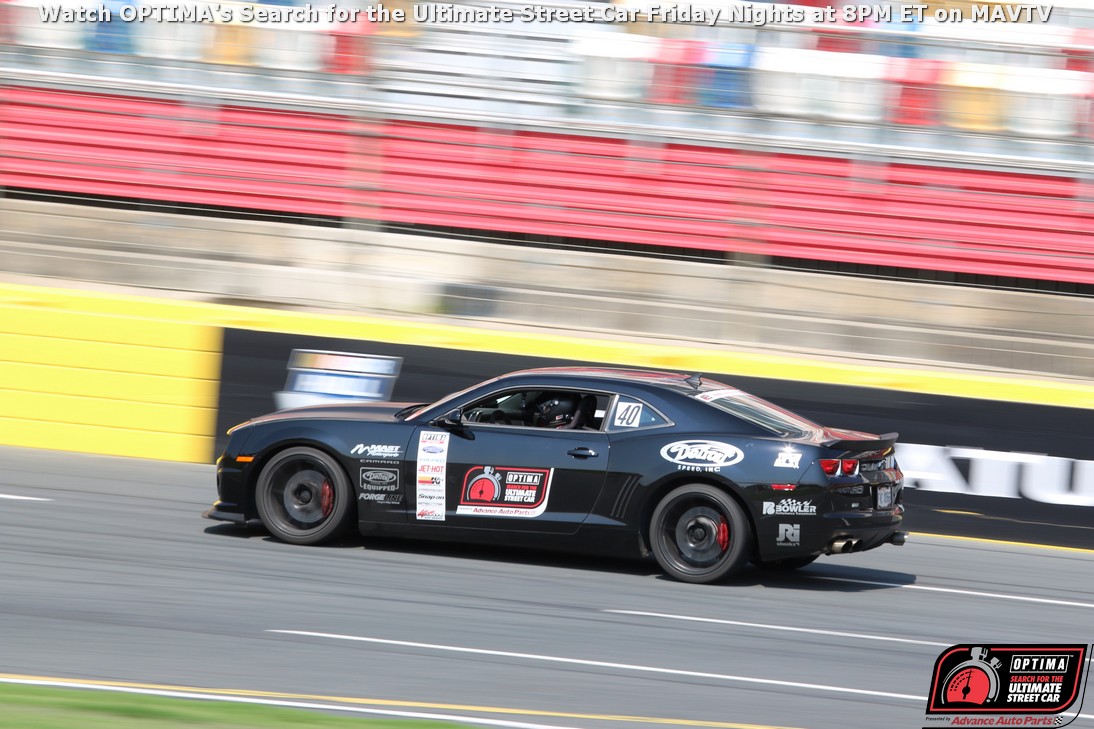 Seven of nine events have been run in the 2015 OPTIMA Search for the Ultimate Street Car, presented by Advance Auto Parts and the competition couldn't be any tougher or tighter than what is going on in the GT class. Bryan Johnson's 2013 Camaro currently sits atop the GT standings, where 97 different cars have competed and scored points in seven events so far this season. The top-ten is dominated by the Camaro, with the popular model holding down seven of the top-ten positions and 16 of the top-25 spots in GT.

Seven of the top-10 GT competitors have also secured spots in the OPTIMA Ultimate Street Car Invitational (OUSCI), with the exceptions being Dannie Pinard's Camaro in seventh, Chandler Premo's BMW M3 in ninth and Casey Woodside's 10th-place Camaro. The only competitor in the top-ten who has not run in both double-point events is fifth-place Ryan Mathews in his 2010 Camaro out of the Detroit Speed stables. While Johnson and defending OUSCI champion, Danny Popp, are the only two competitors who have eclipsed the 500-point mark, the next seven competitors are all within 90 points of each other.

The question at the top becomes which cars will be driven in the remaining events by top competitors? Popp has already registered for both Road America and Fontana, but has his GTL Corvette listed for both entries, perhaps conceding the regular season championship to Johnson, in favor of preparing his Corvette to defend it's OUSCI title? That leaves a gap of 60 points back to third-place Ken Thwaits, who is registered for Fontana with one of the three Camaros he has qualified for the OUSCI in so far this season. If Johnson is unable to complete all events in Fontana, he potentially leaves the door wide open for Thwaits and Jason Chinn to take over the top position. However, Chinn has not yet signed up for Fontana and Thwaits would need to run the Camaro that sits third in points and he recently debuted a fourth vehicle- an RS Motors-built Mitsubishi Evo at Pike's Peak.

Moving past the title contenders, there is a mad scramble to secure a qualifying spot by several competitors in and near the top-ten. Pinard is passing on Road America and focusing his attention on the final double-points event at Fontana, where a consistent performance could give him somewhere in the range of 475 points on the season, perhaps enough for one of the at-large entries, based on season-long points. Premo is signed up to run both Road America and Fontana, which will likely net him either an entry from his finishing position in one of the events or one of the at-large points-based entries.

Casey Woodside is perched precariously in tenth place, less than one point ahead of 11th-place Greg Guerrettaz's Camaro. Guerettaz is signed up for Road America and has competed in both double-points events already. If he does not qualify at Road America and signs up for Fontana, a third double-points event could move him up significantly in the pecking order for receiving an at-large entry to the OUSCI.

Back in 12th place, Cliff Elliott has run in four events so far this season, but struggles early on have resulted in his Mustang only running in one of the two double-points events. He did not sign up for Road America, but did have a strong performance at Pike's Peak. Another strong outing at Fontana could put him in the mix for an at-large entry, but that is no guarantee at this point. As we noted after the Charlotte event, the strength of the GT class suggests competitors as far back as Craig Hardee in 20th place have the opportunity to move up significantly in the season-long points chase in the final two events. However, with Road America sold out and less than 25 slots remaining at Fontana, competitors are advised to sign up sooner, rather than later.

At least two OUSCI invites will be up for grabs in the GT class at Road America, to the top finisher in the class, as well as the KN Spirit of the Event winner. Those who don't make it into the OUSCI at Road America face the prospect of running in the final qualifying event on the West Coast or hoping the points they have accumulated throughout the season will be enough to earn one of the final at-large entries into the OUSCI field. Have a look at the top-ten in GT points after the Pike's Peak event:

The top finisher in each of four classes (GT, GTL, GTS GTV), who has not already been invited to the 2015 OUSCI will receive an invitation at the end of the regular season, in addition to the next 11 competitors, regardless of class, based on season-long points. Competitors can also earn an invitation to the OUSCI by winning their class at an event or by being the top finisher in their class, who has not yet qualified. KN Filters also offers a Spirit of the Event invitation to the OUSCI at each qualifying event, which is not contingent upon points. For more information on OPTIMA's Search for the Ultimate Street Car, presented by Advance Auto Parts, visit www.driveoptima.com