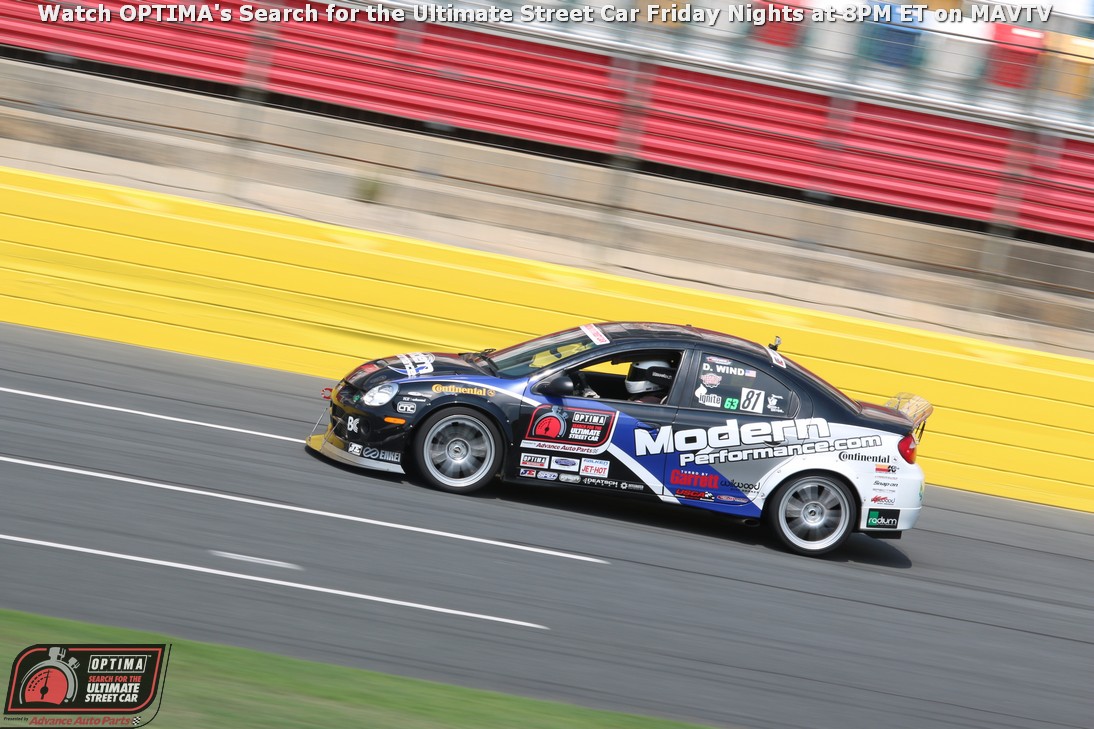 Seven of nine events have been run in the 2015 OPTIMA Search for the Ultimate Street Car, presented by Advance Auto Parts and some may be surprised by a front-wheel drive car leading the GTL class in the season-long points chase. They shouldn't be surprised, as Douglas Wind and his 2004 Dodge SRT4 are a formidable combination that has previously-competed in the OPTIMA Ultimate Street Car Invitational (OUSCI) as well as winning it's class at the One Lap of America. However, with two events to go, Wind's lead in the points is anything but secure.

Second-place James Forbis has only competed in two events in his 2007 Corvette and trails Wind by less than 23 points, while Wind has competed in three events (with the top-three finishes counting toward season-long point totals). Forbis secured his invitation to the OUSCI with a class at Charlotte Motor Speedway and doesn't appear on the registration list for Road America or Fontana, so it's possible he will be content to compete in the OUSCI and concede the GTL season points championship to Wind or someone else...and there are other contenders.

Third-place Martin Pond has also only competed in two events in his 1980 Mercury Zephyr and since he is California-based, he is expected to compete in the final double-points event at Fontana. If Wind passes on Fontana, that would easily allow Pond to catch and pass him in the standings. Fourth-place Brandon Ranvek has also only competed in two events so far, but is signed up for Road America. With his class win at Las Vegas Motor Speedway earlier this year and his runner-up finish at the 2014 OUSCI, he has to be considered one of the favorites to win at Road America, along with defending OUSCI champion, Danny Popp. If Ranvek runs in the final two events of the season, he could easily contend for the GTL points championship.

Fifth-place Danny Tinch is more of a long shot in his 1995 Nissan 240SX, but having competed in the first two double-points events keeps him in the hunt if he decides to make the trek to Fontana. Sixth-place Ronnie Soliman knows the math on the GTL points chase and knows he is not in contention to win the championship. Instead, he has focused his sights on expanding his options for the OUSCI, as defending champion, Danny Popp and 2014 regular season champion, Ken Thwaits have already done. Soliman has locked in a spot for his 2006 Mitsubishi Evo for the OUSCI, but has signed up to run a Nissan GT-R at Road America. A class win there could give Soliman two weapons to choose from for Las Vegas, while also potentially playing spoiler for other GTS hopefuls, looking to secure valuable points in that class.

With three competitors in the top-ten in GTL points registered for Road America, it seems likely that Pond will drop several positions in the standings by the end of the weekend. The question is where the overall points bump spot ends up after Fontana? With so many heavy hitters signed up to run at Road America in GTL, points at that event for non-qualifiers will be hard to come by and five of the top-ten in GTL are still searching for a spot in the OUSCI.

At least two OUSCI invites will be up for grabs in GTL at Road America, to the top finisher in the class, as well as the KN Spirit of the Event winner. Those who don't make it in at Road America face the prospect of running in the final event on the West Coast or hoping the points they have accumulated throughout the season will be enough to earn one of the final 11 at-large entries into the OUSCI field. Have a look at the top-ten in GTL points after the Pike's Peak event:


The top finisher in each of four classes (GT, GTL, GTS GTV), who has not already been invited to the 2015 OUSCI will receive an invitation at the end of the regular season, in addition to the next 11 competitors, regardless of class, based on season-long points. Competitors can also earn an invitation to the OUSCI by winning their class at an event or by being the top finisher in their class, who has not yet qualified. KN Filters also offers a Spirit of the Event invitation to the OUSCI at each qualifying event, which is not contingent upon points. For more information on OPTIMA's Search for the Ultimate Street Car, presented by Advance Auto Parts, visit www.driveoptima.com