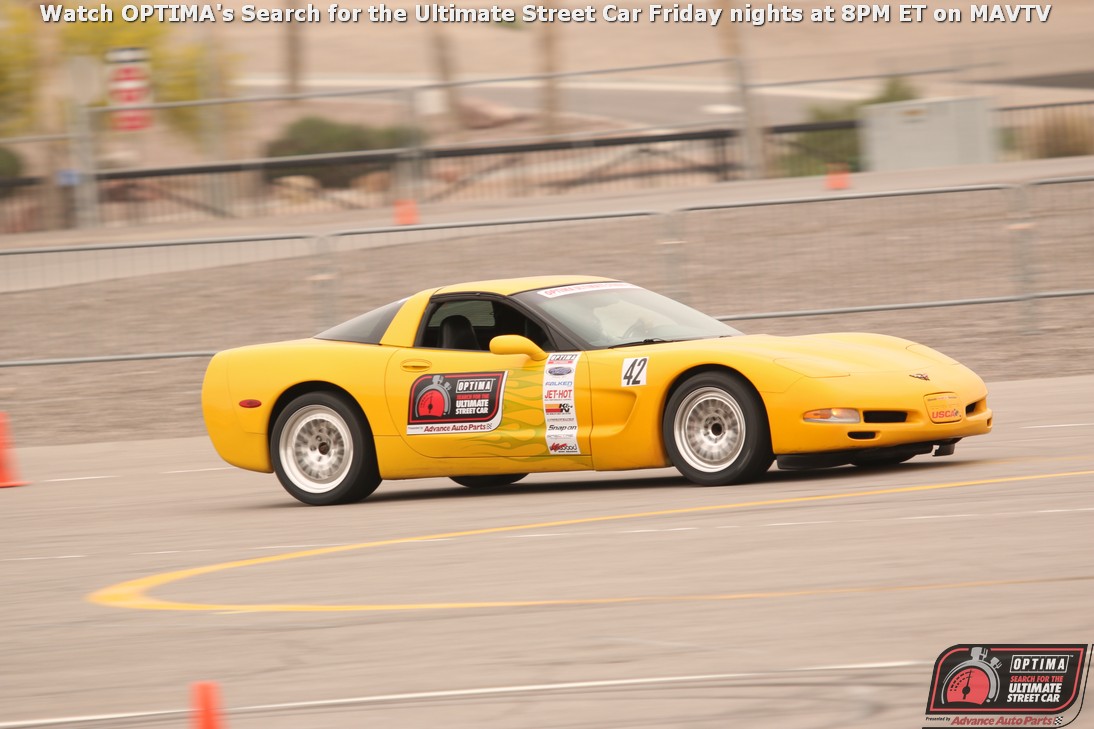 We heard the talk throughout the season- those cars should have their own class, there's too many of them, why are those cars in my class. With the new classes for the 2015 season in OPTIMA's Search for the Ultimate Street Car, presented by Advance Auto Parts, we knew there would be plenty of discussion about how the new classes panned out as the season went on and how competitors felt about the class they were in and who they were competing against. We even saw several competitors switch classes during the season, as the points chase began to unfold and opportunities were identified.

With registration full for the final qualifying event of the year, we decided to take a look at the cars that competed in this year's events and see how the numbers really panned out. We can tell you strictly from the raw numbers, that the series heavily-favored Chevrolets. A total of at least 104 Camaros (46 fifth gens, 34 first gens), 68 Corvettes (29 C5s), nine Chevelles, and seven Novas competed in the series, as well as another 14 Chevys or GMCs. That total doesn't include their corporate cousins at Cadillac or Pontiac, which would add another 15 vehicles to the total. With such a stacked deck, it shouldn't come as a surprised that Chevrolet dominated in several classes.

Mike Maier's GTV win at Las Vegas Motor Speedway was the lone victory by a non-Chevy in the GTV class on a season that also included three KN Filters Spirit of the Event invitations also being handed out to Chevys in the GTV class. However, not including Chris Porter's LS-powered Porsche as a Chevy, we find just six Chevys in the top-ten in GTV points headed into the final event, so we expect to see a few more non-Bowties find their way to SEMA and the OUSCI from that class.

Including cars signed up for the final qualifying event of the year, a total of 120 cars are either signed up to run or have tallied points in the GTV class this season. That is a staggering number for a series in just it's second year and we are humbled and honored that so many folks decided they wanted to be a part of this series, but that's just the first chapter of this book and we have more big numbers to share with you.

The GTS class wasn't nearly as large as the GTV class in terms of total competitors on the season (62 signed up or having run already), but we did see more diversity in the OUSCI entries that emerged from this class. Chevrolet still had a strong presence with two Corvettes qualifying for the OUSCI, but we also had great balance from other manufacturers, with two Mitsubishi Evos, two Subaru STis, a Nissan GT-R and a Porsche 911 Turbo S picking up invites at events. They will be joined by two more Corvettes from the GTS class, that received KN Filters Spirit of the Event invitations to the OUSCI.

The GTS points chase coming down the home stretch shows six Corvettes in the top-ten, with two Mitsubishi Evos, a Subaru and a Nissan GT-R rounding out the top-tier of competitors.

The GTL Class (anything under 3200 pounds)

The GTL class shows 72 cars have either run or signed up to run at Fontana in the 2015 season and as many expected, the Mitsubishi Evos had a strong showing here. Evos captured five GTL Class qualifying spots, with Corvettes grabbing two more and Alexandra Zust picking up the other in her Lotus Elise. That group will be joined by a Camaro, Fiat and Datsun, that all received KN Filters Spirit of the Event invitations.

In spite of the strong performance by Evos in this class, it is Doug Wind's Dodge SRT4 Neon that is in the lead in points and poised to take home the GTL championship with a solid finish at Fontana. In fact, just three Evos appear in the top-ten in points, along with two Corvettes, a Nissan, Zust's Lotus and Martin Pond's Mercury Zephyr stationwagon, which made the jump mid-season from the GTV class.

Chevrolet dominance once again emerged in the GT class, where Camaros captured the first five GT class invites of the season. It wasn't until the Charlotte event, where a Mustang finally grabbed a qualifying spot because the five Camaros that finished ahead of it at the event had all already punched their tickets for Las Vegas. A second Mustang joined that mix at Pike's Peak by finishing behind two Camaros that had already qualified and a BMW did the same at Road America by finishing behind two qualified Camaros. The top-ten in GT points heading into Fontana show Camaros in seven of the top-ten positions, with a Mustang, BMW and Cadillac rounding out that top-tier of what will likely end up being 118 GT competitors on the season. While there were clearly more Chevrolets in this class, it wasn't as if Mustangs went unrepresented, as 38 late-model Mustangs are in that mix.

How will the 2015 OPTIMA Ultimate Street Car Invitational shake out and will someone be able to break the dominance that Chevrolet has not only shown this year, but in OUSCI history (Chevrolet has won six of seven times)? Here's a look at the cars that have competed in the 2015 season of OPTIMA's Search for the Ultimate Street Car, presented by Advance Auto Parts. You tell us if Camaros and Corvettes should have their own class and don't forget to watch new episodes every Friday night on MAVTV at 8PM Eastern.

Can Anyone Catch Jake Rozelle's Camaro?