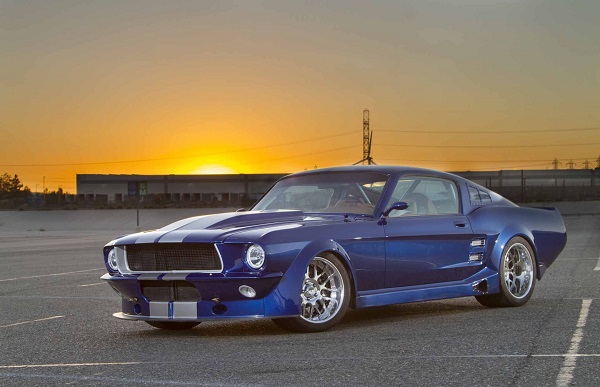 Getting Mustang enthusiasts to agree on what the perfect ponycar buildup is would be impossible. There are just so many great ideas, so many great examples, and so many different purposes to build that you’d have a hard time nailing down “the one.” But even with more than 50 years of hot rod ’Stangs in the wild, there are still a few cars that stand out. The guys at Total Cost Involved Engineering (TCI) in Ontario, California, have assembled a 1967 Mustang fastback with the intent to do just that. 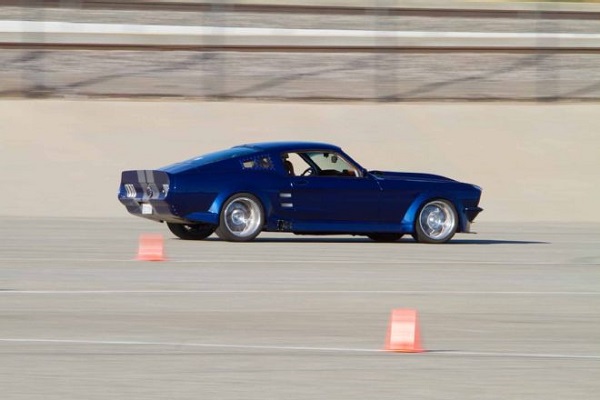 Ed Moss, owner of TCI, purchased his fastback in Bend, Oregon, with the objective of building it into a quick street car, but he admits to having set up the car for some pretty aggressive autocrossing and road racing. After three years of preparation—and as Ed confesses, “too much money,” invested—the finished result shows his commitment to the outcome.

Ed Moss and his 1967 fastback have participated in the Optima Ultimate Street Car Invitational twice (2013 and 2014). Ed didn’t provide any excuses for not ranking number one in either event, but did say he was a rookie.

As a two-time participant in the Optima Ultimate Street Car Invitational, the car’s guts have all be hardened and optimized for running on the track. Beneath the bulging hood is a Smeding Performance 427ci Windsor with a 4.125-inch bore and a 4-inch stroke capable of producing 546 hp and 540 lb-ft of torque. The 7.0L Ford is backed by Tremec T56 Magnum six-speed, and a QuickTime bellhousing shelters the McLeod RST dual-disc clutch and McLeod flywheel. A Currie Track 9 axle is used out back to hold a 31-spline Truetrac limited-slip differential.

The long-tube headers on the 427ci Ford Windsor were custom-made by TCI. Following along the exhaust, there are a Magnaflow X-pipe and mufflers. The exhaust exits through the sides of the Mustang before reaching the rear wheels.

The Ford’s factory suspension was completely scrapped in favor of a short-long arm (SLA) coilover front end with rack-and-pinion steering and a torque-arm rear suspension. Both suspension systems were developed on this car, and TCI now sells these parts to the public. The car’s ride height was significantly lowered (4 inches up front and 3 inches in the rear) using RideTech TQ coilovers with Hyperco springs. Not all of Ed’s attention went into the suspension and drivetrain. With the help of Danny Davis from Danny’s Paint Shop, Ed reworked the car’s classic lines to cover the massive new rubber and improve the car’s aero.

The car rolls on hefty Le Mans wheels by Billet Specialties. The fronts are 18x10s wrapped in Michelin 295-series tires and in the rear are 18x12s with 395-series tires.

Ron Mangus Hot Rod Interiors took care of the interior, which features a combination of saddle-colored leather and suede. A TCI-built rollcage and Crow Enterprize’s seatbelts keep the driver safe. 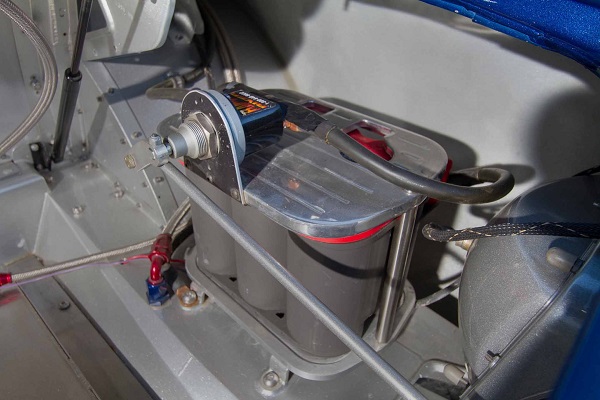 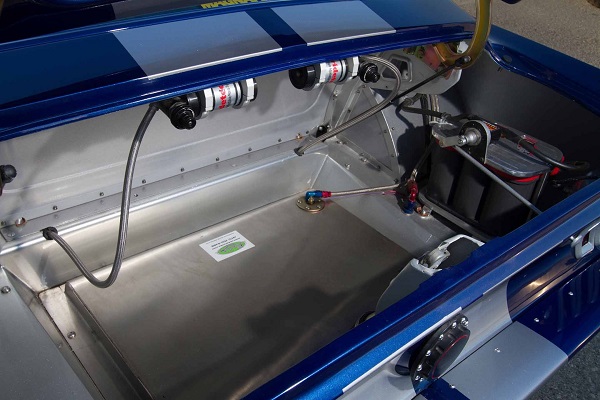 A stainless-steel fuel tank by Rick’s Stainless Tanks was installed in the trunk. Along with the tank are an Optima battery and the RideTech TQ ShockWave system (hanging above the fuel tank).

In the engine bay, three support bars keep the front stable—two connected to the firewall and one connecting both lateral fenders. The radiator was supplied by U.S. Radiator.

Driving all the belts is a Zoops Posi-Trak serpentine pulley system.

This cowl-induction, air-intake housing was fabricated by TCI and hides a KN air filter.

It Still Comes Down to Ford vs. Chevy

While the Mustang was built to showcase his company’s products, Ed’s a real Ford lover and needed this car to egg on a rivalry between him the company’s general manager, who’s a diehard Chevy guy. Ed wanted the car to prove that Fords were superior. Did he? Well, that feud has yet to be settled, but Ed did mention that soon he plans an inter-company competition at California Speedway. Rest assured that regardless of whether Ed or his general manager wins that battle, TCI customers will benefit from the performance feud.

What is a Mopar Car?

What is a Mopar car? As it turns out, Mopars aren't just cars, but we'll explain it a… Read More

OPTIMA makes a direct-fit replacement battery for the 2018 Corvette, but if you need … Read More