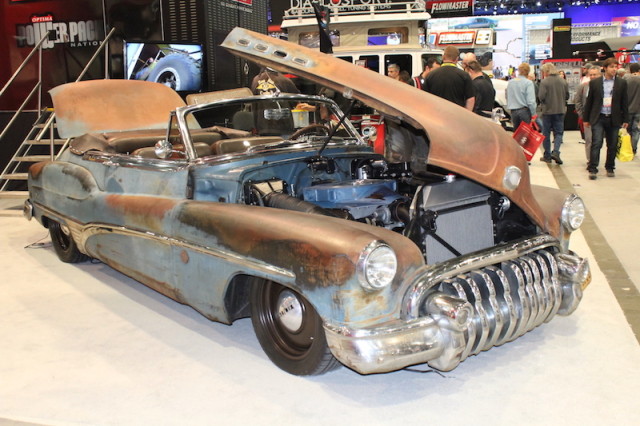 We found Ted Hamm’s sweet 1950 Buick Roadmaster in the OPTIMA Batteries booth at the 2015 SEMA show in Las Vegas, Nevada.

In 1950 the Buick Roadmaster was restyled with a toothy grille that became an icon to many enthusiasts. The Roadmaster was losing popularity to the Buick Special and dropped their share of Buick output to about 12 percent of Buick’s total. Convertibles were not as popular, which makes this particular car a rare find.

Owner Ted Hamm wanted this particular model and hired ICON of Los Angeles to find and build the car of his dreams. The result is this 1950 Buick Roadmaster Convertible built in the Derelict style by ICON.

The car debut to the public in May of 2015 with Ted Hamm behind the wheel. According to the folks at ICON, it took eight months to find the car rusting away in a back yard in Arizona. It was all original except that it was missing the engine and transmission. The story was that the machinist hired to rebuild those pieces went out of business and took the engine and transmission with him.

ICON brought the car back to Los Angeles and performed a frame-off operation that resulted in a 3D digital scan of the car’s footprint. Working with Art Morrison Engineering, ICON developed a chassis that was perfect for the existing body that would not change the mounting but add the stance that the team was looking for.

The body was treated to some additional structural support to rid the inherent cowl shake that was common in the Buicks at that time. The ICON crew added an independent front suspension and four-link rear suspension, with Johnny joints instead of heims.

ICON added an LS7 engine with 480LE transmission for a modern powertrain touch to the old warrior. A hand built stainless gas tank was made and installed with OE GM in tank fuel pump and pickup.

The wheels are one-off circle racing 6061 Billet CNC’d 18-inch wheels with spun stainless hubcaps built specifically for the Derelict style, with acid etched Buick Logo. The wheels are wrapped with BF Goodrich G-Force performance tires. Braking is by virtue of Wilwood six piston calipers on the front and four piston calipers in the rear.

Icon refinished the interior components to make the beast look near new on the inside. Hamm’s goal for the car in the next year is to “Enjoy driving it.” We have to say that our goal would be exactly the same.