The story of Efrain Diaz's 1969 Chevrolet Camaro RS (and it is a legit RS-optioned Camaro) is one that a lot of folks can relate to, as it comes from very humble beginnings. It is also very inspiring as he is now poised to return to the OPTIMA Ultimate Street Car Invitational, presented by K&N Filters, for the second time. Efrain has owned the car for 14 years and acquired it as a basket case in 2002, after he exited a previous relationship that resulted in his '63 split-window Corvette being sold. Efrain went to work with limited resources and painted the car in his garage in 2003, although the gray primer gave the car an unwanted green hue, which forced a repaint.

A pair of 383s were run in the car and subsequently blown up, which took him to 2012 and as today's politicians like to say, a major "pivot" in his approach to the car. Efrain went to a GoodGuys event and saw OPTIMA Brand Ambassador and multi-time OUSCI competitor, Mary Pozzi and others having a great time in their Pro-Touring machines, that were both fast and agile and thought he wanted to go in that direction. He bought a wrecked LS1 Camaro and did some brake and suspension upgrades, but an experience at a Run to the Coast event convinced him that build would be inadequate for any real high-performance driving events.

He spent most of 2012 joining online forums and gathering much-needed intel on what to do with his car and how best to go about doing it and began gathering parts. He bought a dry sump-equipped LS7 from OUSCI regular James Shipka, a Morrison/Mock-styled frame from a stalled project, wheels & tires, Wilwood disc brakes from a West Coast Customs customer, who no longer wanted them, RideTech coilovers off eBay, etc...

By the time 2013 rolled around, Diaz was ready to jump into a full-on Pro-Touring build with the LS7, a T-56 transmission, mini-tubs, the wiring, rear end, brakes, fuel system and related components going into the car at his home garage, whenever he had spare time after work and on the weekends. The car was completed in time to run in the 2014 OUSCI qualifier at Fontana and by "in time," we mean 1AM the day of the event and he successfully drove the car to the track and back home both days, which is a victory in itself.

That reliability more than made up for the fact that Efrain had almost no prior experience autocrossing, speed-stopping or running on a road course, which resulted in a finishing position on that first weekend near the very back of the GTV field. "Even though the driver had no skills and the car had lots of bugs, I had a blast!" says Diaz.

With a few months of shakedowns under his belt, Efrain returned to run in the OUSCI qualifier at Portland International Raceway. Brake and pinion seal issues ended his weekend early, but the exposure helped net him an invitation to the Super Chevy Suspension Challenge. Efrain had about two days notice to get his transmission issues solved and address all the bearings, leaky seals and flexing flange issues that were plaguing it, before heading to Willow Springs. Efrain beat on the car, broke a few things, but got it put back together and ended up finishing third to a couple of very well-built and heavily-sponsored/supported rides.

In February of 2015, Efrain's car graced the cover of Super Chevy magazine and hit the track to run in several OUSCI qualifying events during the 2015 season. He continued to refine the car during this time, upgrading valving and springs in his suspension system, changing out his clutch, swapping the rear end for a floater from Detroit Speed that came out of OUSCI competitor, Karl Dunn's Blu Balz Camaro and installing a Strange pumpkin that he sourced from another past OUSCI competitor, David Pozzi.

The car and driver started to click at that point. Efrain won a Hotchkis autocross event and followed that up with a couple of class segment podium finishes at Pike's Peak and a ninth-place overall finish in the GTV class for 2015. Falken Tires was impressed enough with his car and the progress he had made throughout the season, that they asked him to represent their brand as the Falken-sponsored entry into the 2015 OUSCI.

Efrain narrowed the front suspension, so he could run 335-series tires and outfitted it with C5-C6 Corvette A-arms and spindles, RideTech TQ coilovers, delrin bushings and a Speedway Engineering Sway bar. Out back, the fully-boxed and reinforced DSE Quadralink holds GMR billet hubs, 31-spline axles, a Strange center with 3.89 gears and RideTech TQ coilovers and a DSE rear sway bar. Wilwood brakes are run on all four corners with 14-inch, six-piston super-light units up front and 13-inch, four-piston grippers in the rear. The wheels are Fikse Profil5s, measuring 11x18 in the front and 12x18 in the rear.

Other upgrades include a Rick's stainless steel tank converted with a RetroWorx kit, pump and pulse width modulator from Carl at Vaporworx. The custom intake is from Spectre Performance, the Griffin LS conversion radiator has a Mk8 fan. Vintage air blows cool in Efrain's car and there is plenty of carbon fiber upgrades from Anvil, including a hood with Trackspec hood vents and Fesler hood hinges, as well as a carbon fiber cowl, dash, mirrors and decklid. The front seats are from Recaro and sit inside a RideTech stainless steel Tiger Cage. Gauges are from Speck and AutoMeter.

This year proved to be a breakout year for Diaz, as he started the year with his first career class podium finish at the season-opener at Thunderhill. He followed that up with a seventh-place finish at Pike's Peak and then made the surprise decision to head to NOLA Motorsports Park. Efrain was locked in a tight points battle, not only in the GTV class, but within the group of the Final 15 cars that earn an invitation to the SEMA Show and OUSCI, based on their season-long point totals. NOLA was not expected to be a sold-out event, so Diaz took a chance that he could gain valuable points, especially against some of his West coast competition, by heading East of the Rocky Mountains.

The gamble paid off, as Diaz posted his highest point total of the season (419) and missed out on receiving a GTV class invite to the OUSCI by just one position, to Paul Wilke's 1970 Buick GS 455. As strong as his car had run to that point in the season, he knew there was still work to be done. He hadn't yet secured his invitation to the OUSCI and he'd have to run at the sold-out season finale at Auto Club Speedway, if he wanted to gain enough points to earn his way into the field. This would be especially challenging at Auto Club, because there were a whopping 33 cars running in the GTV class!

Efrain's Camaro posted it's fourth top-ten finish of the season and added a valuable ten points to his season-long total. Did he need them? If Matt Alcala showed up at Fontana in his Mustang, he almost assuredly would've scored enough points to make the OUSCI field, which would've left Efrain on the outside, looking in. Matt brought a Porsche instead and didn't get an invite and Efrain scored 385 points to Kevin Schultz's 383 points, which allowed him to finish in 14th place on the Final 15 list, ahead of Kevin by just three points! Even closer was the battle for fifth place in the GTV class, where Efrain's Camaro edged out Nick Weber's '69 Chevelle by just a single point!

Now it is on to Vegas for Efrain's second trip in as many years. With as many strides as he's taken since last year, we expect him to have his sights set on a strong finish at the OUSCI, which is no easy feat! If you're going to be in Las Vegas for the SEMA Show, you'll want to stick around for the weekend and see the ninth edition of the OPTIMA Ultimate Street Car Invitational, presented by K&N Filters. Tickets are available now! 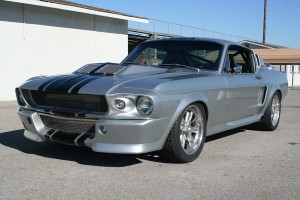 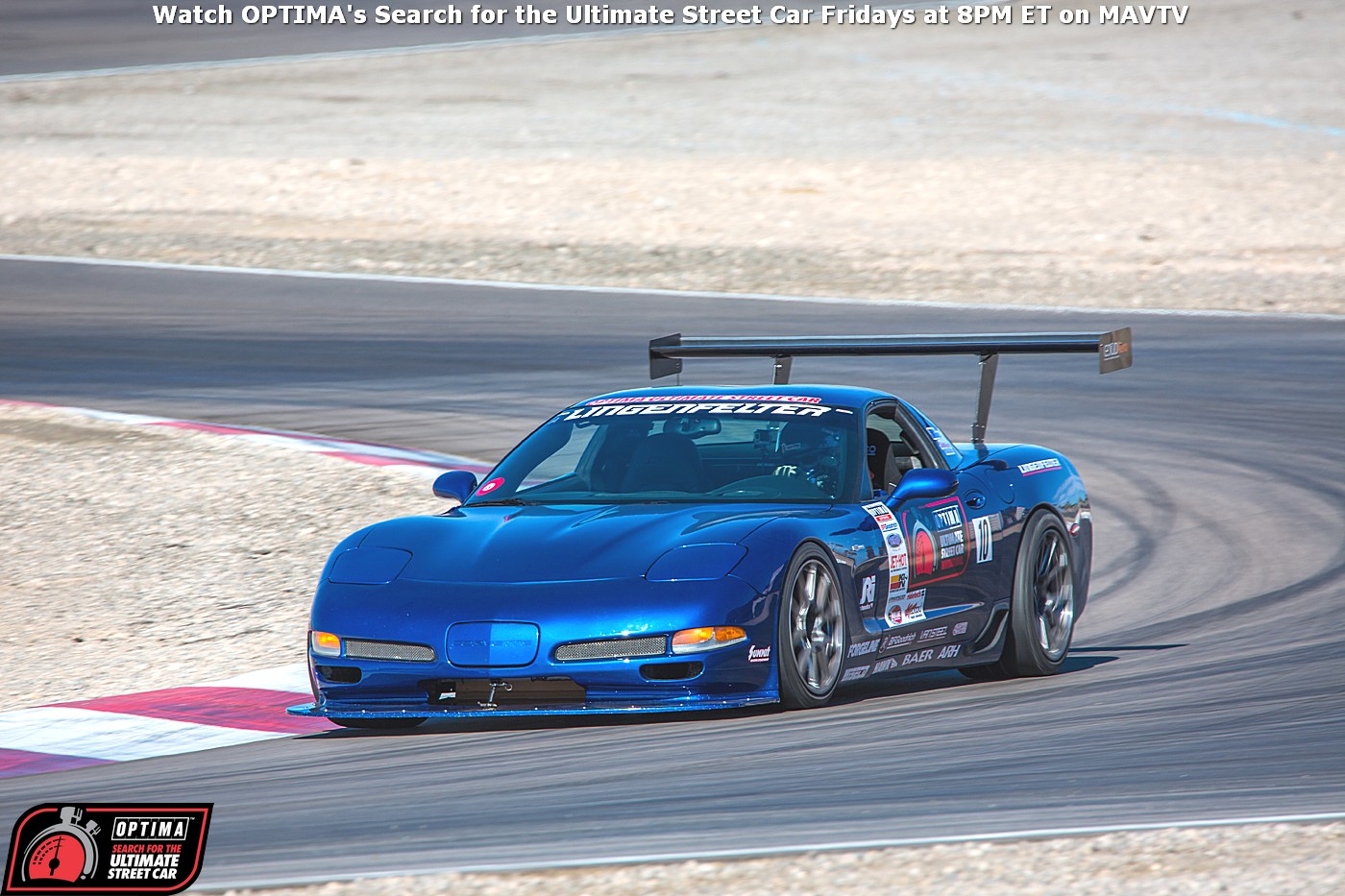