As we continue to look at the contenders for the Ultimate Street Car title, we focus in on the Mitsubishi Evo, which has made regular appearances on the podium of the OPTIMA Ultimate Street Car Invitational, presented by K&N Filters, but has not yet captured the title. Todd Earsley's 2003 Mitsubishi Evo burst onto the OUSCI scene back in 2012 and finished third in his first trip to the big show. He followed that performance up with two more top-ten overall finishes in the next two years, even though the field gets more competitive every year the event is run. Earsley's trailblazing efforts helped put the OUSCI on the radar of other Evo owners and in 2014 the RS Motors crew of Evo owners got serious about pursuit of the OUSCI title.

Brandon Ranvek's 2006 Evo came so close to beating Danny Popp's Corvette in 2014, that had the new points system been in place, Ranvek would've taken home the title. Two other Evos from the RS Motors stables, driven by Ronnie Soliman and Shawn Carroll ended up also finishing inside the top-12 overall that year. Even though Popp prevailed, the Evo owners smelled blood in the water and returned in even larger numbers in 2015, joined by Camaro convert, Ken Thwaits.

Popp once again prevailed in 2015, but this time, it was with help from Brandon Ranvek. Ranvek's Evo won the Speed Stop competition, but had he finished second to Andy Smedegard's '06 Evo (which finished second in the Speed Stop), Smedegard would've taken home the overall title. While Smedegard and Ranvek's Evos rounded out the podium, Thwaits' '06 Evo and Soliman's '06 Evo placed seventh and ninth respectively, dropping four Evos in the top-10 in 2015.

The Evos appeared to be on the verge of taking the title. They demonstrated an ability to dominate in both the PowerStop Speed Stop Challenge and the Detroit Speed Autocross, while staying well within striking distance against the rest of the field in the Lingenfelter Design & Engineering Challenge and the Falken Tire Road Course Time Trial. However, Thwaits' Evo was the only one from those top contenders to make a return appearance in the 2016 OUSCI.

However, Thwaits was joined in 2016 by Austin Barnes in a 2012 Evo and two other Evos via Golden Ticket entries from the SEMA Show. Although the results of the Lingenfelter Design & Engineering Challenge were not revealed until the awards ceremony on Sunday night, Thwaits absolutely dominated the events on Saturday, winning the Power Stop Brakes Speed Stop Challenge, finishing second in the Detroit Speed Autocross and tying Mike DuSold's Camaro for the win in the Lingenfelter Design & Engineering Challenge.

Thwaits left just a single point on the table on Saturday and with the help of Austin Barnes' runner-up finish on the Speed Stop and a seven-point lead over Popp in Design & Engineering, Thwaits put Popp in a position where even if Danny absolutely crushed the field on the Falken Tire Road Course Time Trial, Thwaits could clinch the win with an eighth place finish in that segment. Unfortunately, Thwaits' Evo fell victim to engine trouble early on Sunday and even with replacement parts sourced from fellow competitor, Luke Keller's '06 Evo, he couldn't get past the legion of ten Corvettes and five others, who trailed Popp on the Road Course.

If the Evos of Ranvek, Smedegard and Soliman made the field in 2016, could they have helped Thwaits gap Popp even further on Saturday, as the Corvettes seem to do for Popp every year on Sunday? Could Ranvek or Smedegard, both of whom have previous runner-up finishes in the OUSCI, have carried the torch for the DSM nation in 2016? It's all speculation at this point, but what isn't open to debate is that the Evo platform is clearly capable of winning the OUSCI title. While Popp has benefited from fast Corvettes gapping his competition on Sundays in past years, Thwaits nearly pulled off the win single-handidly in 2016. Will the Evos return in full force in 2017 and launch a coordinated attack against Danny Popp's dominance? Thwaits' performance in 2016 suggests it may only take one.

If you're not partial to imports or domestics for chasing an OUSCI crown, perhaps you'd consider something from Europe? 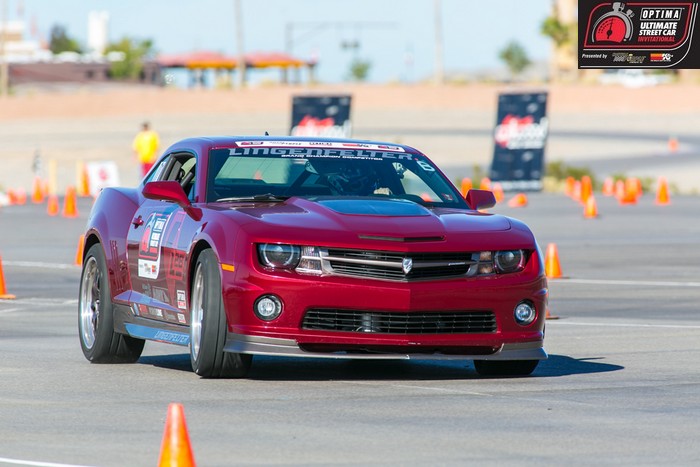